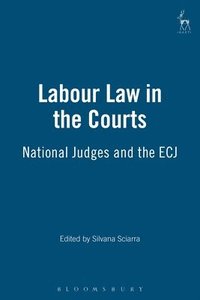 Labour Law in the Courts

National Judges and the ECJ

av Silvana Sciarra
Inbunden Engelska, 2001-03-01
1059
Köp
Spara som favorit
Skickas inom 10-15 vardagar.
Fri frakt inom Sverige för privatpersoner.
Finns även som
Visa alla 1 format & utgåvor
The research underpinning this book was designed to support and further develop ideas already described in broader and more theoretical studies,about the dialogues happening among national courts and the ECJ as a key factor of European integration. The role played by the courts as part of the interplay of institutions within the European Union has been recognised as crucial, and this research, which was conducted at the European University Institute, homes in upon some specific examples. It deals with six Member States of the European Union: Denmark, France, Germany, Italy, Spain and the UK, analysing two select but significant areas of substantive law: transfer of undertakings and equality legislation. The analysis dwells on these key areas, although some other fields of social law were selected in order to prove the main theory underlying the whole research. While on the one hand offering a comparative assessment of developments in the six member states chosen for study, the research also highlights national peculiarities as well as the factors perceived to be driving national actors towards the preliminary ruling procedures This work will be of interest to all scholars of EU law and labour law.
Visa hela texten

...solid account examining the European Court of Justice...fine example of the new EC scholarship that ought to be read by those interested in comparative legal studies or in the politics of Europe. David Schultz The Law and Politics Book Review June 2002 This is an exciting book, whose content should be of interest to a wide readership, and which will no doubt provide the basis for further study in this field. Tonia Novitz, EUI and University of Bristol European Public Law September 2002

Silvana Sciarra is Professor of Law at the University of Florence.

Integration through courts - Article 177 as a pre-federal device, Silvana Sciarra: community dialogues under Article 177 as a lawmaking process; judges as legislators - testing labour law cases; integration, interdependence and multi-level policy-making; pre-federal and pre-constitutional labour law in inter-court co-operation; a research project on labour law in the courts - exercises in neo-institutionalism. Gender equality - a fundamental dialogue, Clair Kilpatrick: preliminary remarks; the active preliminary reference couple - Germany and the UK; the languid couple - France and Denmark; the inactive couple - Spain and Italy; conclusions. Transfers of undertakings: preliminary remarks, Paul Davies; the European Court of Justice in dialogue on transfers of undertakings - a fallible interlocutor?, Sylvaine Laulom; transfers of undertakings - an experience of clashes and harmonies between community law and national legal systems, Fernando Valdes Dal-Re; Judicial developments of EC social policy and intro-community institutional dialogues - how to define a "legal transfer", Antonio Lo Faro. Lessons from some secondary areas of dialogue: preliminary remarks, Antoine Jeammaud; job centre - an illustrative example of strategic litigation, Silvana Sciarra; the European Court of Justice and the Spanish labour and social security courts - two examples, Fernando Vales Dal-Re; never on a Sunday - what has (EU) law got to do with it?, Miguel Poiares Maduro. The complexities of living with an interpretation prerogative - some observations on an imperfect dialogue, Spiros Simitis.