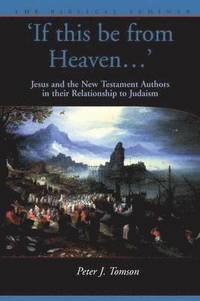 If this be from Heaven

Jesus and the New Testament Authors in their Relationship to Judaism

'Tomson's knowledge of Judaism of the period in which Christianity originated is exemplary.....the topic of this book is of immense importance for Christian-Jewish understanding' Hendrikus Boers, Candler School of Theology, Emory University, Atlanta "of immense importance for spreading the knowledge of the interwoven development of Judaism and Christianity." --Journal of Beliefs and Values 23.1 (2002) "Tomson is clearly very much at home with a range of Jewish sources and his study provides an excellent discussion of first-century Judaism in all its various forms." --Expository Times 113.8 (May 2002) "...an easy-to-read survey of the NT documents...Tomson has done us a great service in attempting to draw his developmental scheme...Its advantages over generalizing approaches are undeniable, while it still dares to confront the issues head on, one text at a time." --Journal of Biblical Literature, Fall 2002 "In this substantial monograph, Tomson displays an impressive depth of knowledge of postbiblical Judaism and nascent Christianity- their history, literature, and respective source languages." -Michele Murray, Review of Biblical Literature, October 2004 * Review of Biblical Literature *

Peter Tomson is Professor of New Testament Studies at the Protestant Theological Faculty in Brussels.