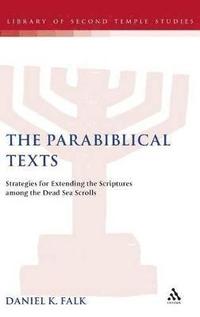 Strategies of Extending the Scriptures Among the Dead Sea Scrolls

av Daniel K Falk
Inbunden Engelska, 2007-05-01
1679
Köp
Spara som favorit
Skickas inom 10-15 vardagar.
Fri frakt inom Sverige för privatpersoner.
This book introduces the reader to a fascinating genre of writings that retell biblical narratives in various ways. They reflect the concerns and methods of early Jewish interpreters of Scripture. Daniel Falk surveys the content and major scholarly issues of three key examples: Genesis Apocryphon (1QapGen), Reworked Pentateuch (4Q158, 364-5), and Commentary to Genesis (4Q252-4). Particular attention is paid to exploring why and how the authors interpret the Scriptural text in their distinctive ways. The book traces continuity and discontinuity with other Jewish and Christian traditions, and reflects on the significance of these texts for the status of Scripture and the boundary between Scripture and interpretation. Drawing on the latest research and reconstructions of the texts, and with extensive bibliographies, this is an authoritative guide for the student or the non-specialist scholar.
Visa hela texten

"In keeping with the format and goals of the Companion to the Qumran Scrolls series, this volume focuses on one specific type of Dead Sea Scrolls material and offers an introduction and close study of specific texts at a somewhat advanced level, certainly more detailed and technical than what would be found in a basic introductory textbook." - "While this is a careful investigation of three text, it is also a study in the development of the biblical canon. It will be of interest to scholars and students of Qumran literature." -Dianne Bergant, The Bible Today, January/ February 2008--Sanford Lakoff 'An insightful and successful volume that will prove useful to anyone with an interest in early Jewish compositions that resemble, but are not, biblical texts. A beneficial and informative volume.' - Matthew Goff, Review of Biblical Literature, March 2008--Sanford Lakoff "Review of Biblical Literature " "This is an appealing book that will expand the reader's understanding of the Bible and the history of its development. It provides a wealth of information for the scholar and explains this little known genre for the non-scholar. It is an interesting and engaging volume." -Congregational Libraries Today--Sanford Lakoff "Falk has initiated what one hopes will be the first of several discussions of this literature. He has shown a number of important comparisons and contrasts with Jubilees and 1 Enoch especially... I commend Falk's useful study of scripture in late Second Temple Judaism to scholars and students alike and anticipate further investigations to emerge as a result of his perceptive study." - Lee Martin McDonald, Review of Biblical Literature, July 5, 2008 "Falk has succeeded in making significant Second Temple research available for specialists and other interested readers." 32.5 (2008)--Sanford Lakoff "Journal for The Study of the Old Testament "

Daniel K. Falk is Associate Professor of Ancient Judaism and Biblical Studies at the University of Oregon, USA, and author of Daily, Sabbath, and Festival Prayers in the Dead Sea Scrolls (Brill, 1998).