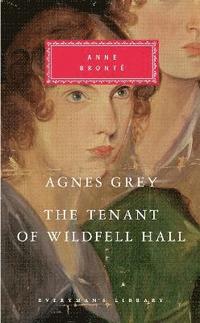 av Anne Bronte
Inbunden Engelska, 2012-03-30
163
Bevaka
Spara som favorit
Tillfälligt slut – klicka "Bevaka" för att få ett mejl så fort boken går att köpa igen.
The Tenant of Wildfell Hall is Anne Bronte's second and most celebrated novel. Set in the dramatic northern landscape made familiar by the author's more famous sisters, it tells the story of Helen Graham, a mysterious single woman who rents the semi-ruinous Hall of the title. With a child but no husband, Helen divides the community between those who admire her charm and spirit and those who suspect her morals. Chief among her supporters is a local farmer, Gilbert Markham, who tells her story. Written before The Tenant, Agnes Grey, based on the author's own experience, explores the position of women in Victorian society through the story of a young woman forced to work as a governess when her father is ruined financially.
Visa hela texten

Anne Bronte was born at Thornton in Yorkshire on 17 January 1820, the youngest of six children. That April, the Brontes moved to Haworth, a village on the edge of the moors, where Anne's father had become the curate. Anne's mother died soon afterwards. She was four when her older sisters were sent to the Clergy Daughters' School at Cowan Bridge, where Maria and Elizabeth both caught tuberculosis and died. After that, Anne, Charlotte, Emily and Branwell were taught at home for a few years, and together, they created vivid fantasy worlds which they explored in their writing. Anne went to Roe Head School 1835-7. She worked as a governess with the Ingham family (1839-40) and with the Robinson family (1840-45). In 1846, along with Charlotte and Emily, she published Poems by Currer, Ellis and Acton Bell. She published Agnes Grey in 1847 and The Tenant of Wildfell Hall in 1848. That year, both Anne's brother Branwell and her sister Emily died of tuberculosis. A fortnight later, Anne was diagnosed with the same disease. She died in Scarborough on 28 May 1849.