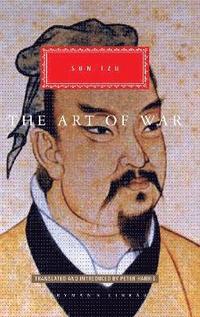 The Art of War

av Sun Tzu
Inbunden Engelska, 2018-03-01
135
Köp
Spara som favorit
Skickas inom 5-8 vardagar.
Gratis frakt inom Sverige över 159 kr för privatpersoner.
Finns även som
Visa alla 8 format & utgåvor
Written over two thousand years ago, The Art of War contains penetrating insights into the nature of power, inter-state rivalry, realpolitik and military success, relevant to any age. It was first translated into English in the early 20th century. Sun Tzu's short lines of argument and pithy aphorisms are highly accessible to modern readers, and his text has almost achieved cult status. He is quoted everywhere 'from divorce courts to Facebook', and has something to offer anyone interested in honing leadership skills and achieving in any competitive environment 'from the boardroom to the bedroom'. Sun Tzu's advice is shrewd and pragmatic - he does not glory in slaughter and prefers to win battles off the battlefield if possible; he is a strong supporter of the use of deception, of varying your shots and above all, of doing your research: knowing your enemy is key; but of little use if you do not also 'know yourself'. Features a brilliant new translation by Peter Harris. The iconic text in its original 13 short chapters printed unencumbered by notes The text repeated, this time interspersed with selected extracts from the canon of traditional Chinese commentators who have explained Sun Tzu's wisdom over the centuries; each chapter ending with an explanatory note from Peter Harris
Visa hela texten

... this book has become a must-read for modern military strategists (even though Sun Tzu wrote about chariots rather than drones), the KGB and also for business thinkers who have applied his martial philosophy to the war that is modern capitalism. * Guardian * ..this book is a guide to winning wars, avidly studied by America's armed forces as it was by Mao. . ..American strategists often read the "Art of War" to understand China not as an alluring and persuasive wielder of soft power, but as a potential enemy. * Economist *

Sun Tzu (Author) Sun Tzu was a Chinese general and military strategist who lived in the 6th century BC. David H. Petraeus (Author) General David H. Petraeus has had wide experience of combat in many theatres of war in the course of a distinguished 37-year military career, though he is probably best known for his leadership in both Iraq and Afghanistan and his role in the production of the Counter-Insurgency Manual (2006). On retirement he served for a year as Director of the CIA. He holds several professorships and is a regular commentator in the US press on security and economic issues.