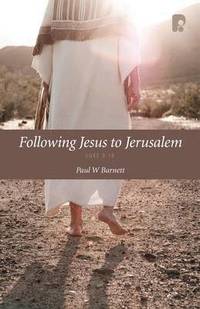 av Paul W Barnett
Häftad Engelska, 2012-06-01
179
Köp
Spara som favorit
Skickas inom 7-10 vardagar.
Fri frakt inom Sverige för privatpersoner.
Paul Barnett expounds Luke chapters 9-19 with the intention of provoking faith and faithfulness in the lives of Jesus' followers today. Taking the metaphor of life as a journey, Paul Barnett follows the journey of Jesus to Jerusalem and suggests that we journey with him. Barnett stresses the important place of kingdom in this and the ethics of Christian living which naturally follow from being in the presence of a humble Saviour. More than a commentary, then, this important book challenges the way we live in the light of Jesus' last days and self-sacrifice.
Visa hela texten

Paul Barnett (Ph.D., University of London) is the retired Bishop of North Sydney, and has taught at a number of prestigious academic institutions. Since his retirement, he is Honorary Associate in Ancient History, Macquarie University, Sydney; Lecturer Emeritus, Moore College, Sydney; and Teaching Fellow at Regent College, Vancouver. He was also Head of Robert Menzies College, Macquarie University. He is the author of some major commentaries on 2 Corinthians (Bible Speaks Today Series and The New International Commentary on the New Testament); 1 Corinthians: Holiness and Hope of a rescued people (Focus on the Bible); Mark: The Servant King, John: The Shepherd King, 1 Peter: Living Hope and Revelation: Apocalypse Now and Then (Reading the Bible Today). As well as a number of books on New Testament Background and the Historical Jesus such as After Jesus: The Birth Of Christianity, Is The New Testament History? (Revised 2004), Jesus and The Rise Of Early Christianity, The Truth About Jesus(Revised 2004), and Jesus And The Logic of History (New Studies In Biblical Theology). Most recently he has produced The Corinthian Question: Why did the church oppose Paul? (Intervaristy Press, 2011) and three volumes in the After Jesus series; The Birth of Christianity: The First Twenty Years; Paul: Missionary of Jesus and Finding the Historical Christ: After Jesus. - Editorial Review.