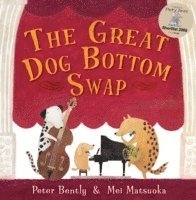 av Peter Bently
Häftad Engelska, 2010-04-01
99
Köp
Spara som favorit
The day has arrived for the Dogs' Summer Ball. It's so high class, that each dog must remove their bottom before they are allowed inside the hall. But in the middle of all the frivolity something unexpected happens and the dogs have to make a hasty exit... with or without the correct bottom! 'Big, clever, funny' SUNDAY TELEGRAPH 'It's maybe my all time favourite kids' book' DAWN O'PORTER 'Unmissable!' BOOKSELLER Celebrating its 10th year in publication, this unmissable and hilarious picture book has been shortlisted for the Sheffield Book Award, the Best Children's Illustrated Book Award and the Roald Dahl Funny Prize.
Visa hela texten

"Big, clever, funny." The Sunday Telegraph "It's maybe my all time favourite kids' book" Dawn O'Porter "Unmissable!" Bookseller's Choice, The Bookseller "It's illustrated with beautiful simplicity, written with verve - and is like nothing else you'll read this year." -- Benjamin Secher The Daily Telegraph "Clever and inventive... great fun from an author with a superb sense of humour... this is a hilarious picture book for slightly older children and a great book to read aloud." Northern Ireland Homes & Lifestyle

Peter Bently (Author) Peter Bently grew up in an army family and went to ten different schools. He studied languages at Oxford and worked as a journalist and non-fiction book editor before becoming a children's author. He is the author of more than seventy books, including Cats Ahoy!, which won the Roald Dahl Funny Prize, and King Jack and the Dragon, which was an American Library Association Notable Book of the Year.Mei Matsuoka (Illustrator) Since graduating from Kingston College of Art in 2004 Mei Matsuoka has been in much demand as an illustrator. Her illustrations for a short story won first prize in a UNESCO sponsored competition, which she travelled to Japan to collect.