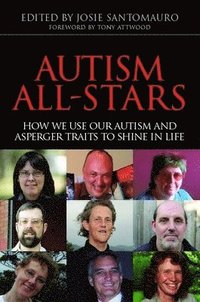 av Josie Santomauro
Häftad Engelska, 2011-12-15
259
Köp
Spara som favorit
Skickas inom 7-10 vardagar.
Fri frakt inom Sverige för privatpersoner.
Looking at the positive influences, great talents and unique thought processes of individuals with Autism Spectrum Disorders, this book is a celebration of those who have used their autism to shine in life. Writers from all over the world at different stages in their careers, and from very different backgrounds, share their experiences of creating a successful life on the autism spectrum. Each explains how it is possible to draw on autistic strengths not just to make your way in the world, overcoming challenges and obstacles, but also to make your life a real success. Education, the world of work, and relationships are the focus of the first part of the book, which then goes on to look at exceptional creativity, and the use of special interests. The autobiographical stories in this book are full of wisdom and humour, and will be an inspiration for anyone with high-functioning autism or Asperger Syndrome, their family and friends, and the professionals who work alongside them.
Visa hela texten

Josie Santomauro is a full-time writer living in Brisbane, Australia. Her son, Damian, was diagnosed with Asperger Syndrome at the age of five. Josie has written several books on AS, as well as numerous fiction books for children and young adults under the name Josie Montano. She regularly gives seminars and talks on AS, and in 2009 was awarded the Parent/Carer Award in recognition of outstanding achievement by Autism Queensland Australia. Tony Attwood, PhD, is a clinical psychologist from Brisbane, Australia, with over 30 years of experience with individuals with autism spectrum disorders. He is currently Adjunct Professor at Griffith University in Queensland. Peter Myers is an artist whose work has appeared in exhibitions all over the world, and has been made into postcards, posters and mugs. Peter has Asperger's Syndrome and lives in York, UK. Visit his website at www.artisticautistic.co.uk. Dr Wendy Lawson, a psychologist, qualified counsellor and social worker has operated her own private practice for many years. Wendy was awarded fourth place as aEURO~Victorian Australian of the year' in 2008. Originally diagnosed as being intellectually disabled, then in her teens as being schizophrenic, and finally in 1994, Wendy was diagnosed as being on the autism spectrum. The mother of four children, Wendy has been married, separated and divorced, has experienced the death of one of her teenage sons, lost friends and status due to being openly gay, faced ill health and recently is coming to terms with the fact that she is aging! Wendy's youngest son is also on the autism spectrum. Donna Williams was born in Australia in 1963. She was assessed at age two as psychotic, labelled disturbed and tested for deafness throughout childhood before being diagnosed as autistic in 1990. Today she is an internationally best-selling author with nine published books, an artist, singer-songwriter and emerging screenwriter. One of the most well-known people with autism in the world, Donna is a renowned international public speaker, a qualified teacher and has worked as an autism consultant since 1995. Roger N Meyer is the executive director of the Portland Asperger Syndrome Research Project. He was diagnosed with Asperger Syndrome in 1997. He worked for many years as a cabinet-maker, gaining direct experience as a trainer, writer and individual counsellor. He has recently worked as a parent/student special education advocate and a support group moderator. He is co-author of A Manual for Resolving Group Conflicts and an article on 'Self-determination for people with developmental disabilities and autism' which appeared in the Journal of Autism and Developmental Disorders. Deborah Lipsky is a high-functioning autistic individual with substantial experience in emergency and trauma management, having formerly worked as a firefighter, emergency medical technician, and reserve police officer. She is now a Continuing Education Seminar Presenter and Keynote Speaker, and is a consultant for schools, agencies, and private parties, specializing in meltdown management plans. Yenn Purkis is an autistic and non-binary advocate, author and presenter. Yenn has a Masters degree in Fine Art from RMIT University. Yenn has given a presentation for TEDx Canberra and has been a frequent keynote presenter at autism and disability events for several years. Yenn has a number of awards, including the 2016 ACT Volunteer of the Year award and a number of other awards for community leadership including being nominated for the Australian of the Year award in 2017. Yenn has worked full-time for the Australian Public Service since 2007. They have facilitated a support group for autistic women and gender diverse folks in Canberra since 2011. Yenn has featured in media interviews for many years and was one of four autistic adults featured in the ABC TV documentary Alone in a Crowded Room. Yenn lives in Canberra, Australia.