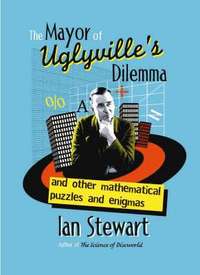 The Mayor of Uglyvilles Dilemma

And Other Mathematical Puzzles and Enigmas

av Ian Stewart
Inbunden Engelska, 2005-11-01
149
Köp
Spara som favorit
Specialorder (osäker tillgång). Skickas inom 11-20 vardagar.
Fri frakt inom Sverige över 159 kr för privatpersoner.
Inside this small (but perfectly formed) hardback there lurks some of the most devilishly difficult mathematical brainteasers human beings have yet devised. Woven into them are marvellously witty introductions to some of the key numerical mysteries and paradoxes. Along the way, we meet Klephtnose, the geometrical Pharoah, Stacey Ermine, the winner of the Turnip Prize, the members of Wackingham Cricket Club, the villagers of the town of Much Grumbling and the eponymous Mayor of Uglyville, each of whom present us with a mind-bending mathematical problem. But never fear. The answers are at the back of the book.
Visa hela texten

IAN STEWART is currently Professor of Mathematics at Warwick University. He is an active popularizer of mathematics and related areas of science. In 1995 he was awarded the Royal Society's Michael Faraday Medal for furthering the public understanding of science; his book Nature's Numbers was shortlisted for the 1996 Rhone-Poulenc Prize for Science Books and The Science of Discworld (co-authored with Terry Pratchett and Jack Cohen) spent 13 weeks in the top 10 of the Sunday Times non-fiction bestseller list He is the mathematics consultant for New Scientist, and has been a consultant for Encyclopaedia Britannica. He was elected a Fellow of the Royal Society in 2001. The Mayor Of Uglyville's Dilemma was published by Atlantic Books in 2005.