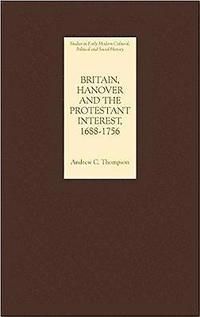 av Andrew C Thompson
Inbunden Engelska, 2006-08-01
799
Köp
Spara som favorit
Skickas inom 5-8 vardagar.
Fri frakt inom Sverige för privatpersoner.
Religious ideas and power-politics were strongly connected in the early eighteenth century: William III, George I and George II all took their role as defenders of the protestant faith extremely seriously, and confessional thinking was of major significance to court whiggery. This book considers the importance of this connection. It traces the development of ideas of the protestant interest, explaining how such ideas were used to combat the perceived threats to the European states system posed by universal monarchy, and showing how the necessity of defending protestantism within Europe became a theme in British and Hanoverian foreign policy. Drawing on a wide range of printed and manuscript material in both Britain and Germany, the book emphasises the importance of a European context for eighteenth-century British history, and contributes to debates about the justification of monarchy and the nature of identity in Britain. Dr ANDREW C. THOMPSON is Lecturer in History, Queens' College, Cambridge.
Visa hela texten

A fine study of British and Hanoverian foreign policy that raises important new questions; it reminds us of the importance of intangible and immaterial factors like religion, antipathy, stereotypes, and prejudices that, besides material interests, shaped foreign policies in the early modern period. EIGHTEENTH-CENTURIES STUDIES [A] painstakingly researched and authoritative account. A major account of early eighteenth-century British foreign policy, which should be required reading not just for those interested in the evolution of the British role in Europe, but also for those working on religion, domestic affairs and the press as well. HISTORY A great achievement. [...] Provides a dense, fact-filled and solidly source-based account. BULLETIN of the GERMAN HISTORICAL INSTITUTE LONDON [An] intellectually stimulating book.REVIEWS IN HISTORY Drawing on a wide and welcome range of British and European archives, this is an impressive and richly-instructive work. ARCHIVES Richly instructive, clearly organised and well-written. INTERNATIONAL HISTORY REVIEW, March 2008