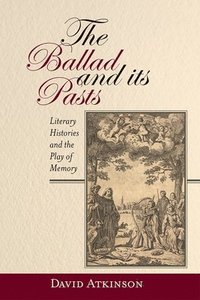 av David Atkinson
Inbunden Engelska, 2018-02-09
719
Köp
Spara som favorit
Skickas inom 5-8 vardagar.
Fri frakt inom Sverige för privatpersoner.
Katharine Briggs Award 2018: Runner Up The ballad genre, and its material, are frequently backward-looking in terms of subject and style: it is ideally suited to the reimagining of past events, both real and fictional. This volume addresses the past of the ballad and the past in the ballad. It challenges existing scholarship by embracing discontinuity rather than continuity, seeing the ballad as belonging to a culture of cheap print and imaginative literature rather than the rarefied construct of a mythical "folk". It finds a conscious antiquarianism and medievalism reinterpreting the genre at different stages of its literary history, at the same time as the ballad itself is continually adapting to the needs of readers, singers, and audience. Chapters cover the few remaining examples of the medieval ballad, and Thomas Percy's medievalism; David Mallet's "William and Margaret" and the beginnings of the gothic mode early in the eighteenth century; ballads of "Sir James the Rose" and the culture of cheap print in Scotland from the late eighteenth through to the early twentieth century; shipwreck ballads on the loss of the Ramillies and "Sir Patrick Spens", and the reimagining of the past in the present, with a diversion into Coleridge's "Dejection: An Ode"; murder ballads, special providence, and the history of mentalities from early modern to Victorian times. DAVID ATKINSON is Honorary Research Fellow at the Elphinstone Institute, University of Aberdeen.
Visa hela texten

Katharine Briggs Award 2018: Runner Up Atkinson's readings . . . prove to be critical, and critically needed, engagements that seek to account for examples that disrupt the narratives of literary history without entirely scrapping that history. HUNTINGTON LIBRARY QUARTERLY Both ballad and literary scholars will have their understanding of how ballads encode the past enriched. Throughout, Atkinson is scrupulous about what claims his evidence will bear; he knows the archive is far from neat, and his prudence makes his ambitious claims about the ballad more persuasive. MODERN PHILOLOGY Atkinson rightly points to the importance of the past - not only in creating the histories of the ballad, but also within the texts themselves. His analysis is based on careful scrutiny of the available texts and histories: he points us in the direction of a fuller and richer history. MUSICULTURES

Bloggat om The Ballad and its Pasts - Literary Histo...

The Ballad and the Idea of the Past Survival and Revival: The Medieval Ballad and Ballad Medievalism Gothic Beginnings: Dead Lovers Return Imitations of Ancient Ballads?: Swordsmen in the Landscape The Idea of a Memory: Worse Things Happen at Sea Providence and the (Re-)Ordering of Reality: Murder Will Out? Afterword Select Bibliography