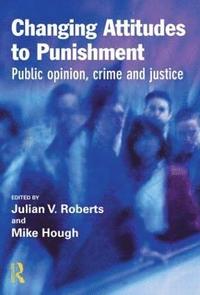 av Julian Roberts, Mike Hough
Häftad Engelska, 2002-10-01
549
Köp
Spara som favorit
Skickas inom 10-15 vardagar.
Fri frakt inom Sverige för privatpersoner.
Finns även som
Visa alla 1 format & utgåvor
Throughout the western world public opinion has played an important role in shaping criminal justice policy. At the same time opinion polls repeatedly demonstrate that the public knows little about crime and justice, and holds negative views of the criminal justice system. This book, consisting of chapters from leading authorities in the field, is concerned to address this problem, and draws upon research in a number of different countries to address the issues arising from this state of affairs. Its main aims are: to explore the changing and evolving nature of public attitudes to sentencing to examine the factors that influence public opinion and to bring together recent international research which has demonstrated ways in which public attitudes can be changed to propose specific strategies to respond to the crisis in public confidence in criminal justice.
Visa hela texten

'The book makes a much needed and timely contribution to building a body of knowledge that deconstructs current misconceptions about public attitudes to punishment.' SCOLAG Journal 'This book provides comprehensive coverage of some of the important issues linked to changing attitudes to punishment, and provides some fascinating and accessible insights .. as a consequence it is a significant contribution to furthering understanding'; 'At the end of the day I can think of very little else that that I would have wished had been included in this excellent text, and little that ought to be excised.' Commonwealth Judicial Journal 'The volume will undoubtedly serve as a stimulus for more research on public opinion and attitudes about crime, thereby contributing to improvements in penal policy.' British Journal of Criminology