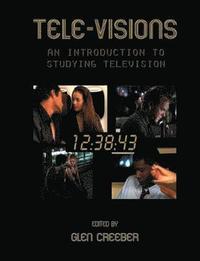 Tele-visions: An Introduction to Studying Television

An Introduction to Studying Televisions

av Glen Creeber
Häftad Engelska, 2006-03-01
379
Köp
Spara som favorit
Specialorder (osäker tillgång). Skickas inom 11-20 vardagar.
Fri frakt inom Sverige för privatpersoner.
Finns även som
Visa alla 1 format & utgåvor
Tele-Visions: An Introduction to Studying Television Studies has been specifically designed to offer a comprehensive, authoritative, accessible and lively introduction to the subject of television studies. Written by many of the leading international figures in the field, it covers all the major issues, debates, key terms, histories and methodologies that go to make up this exciting new area of expertise. Skilfully illuminated through actual programmes, detailed case studies and recommended readings, it will offer an invaluable insight into how television is produced, broadcast, controlled, consumed and critically examined. From textual analysis to audience studies; from studying drama to studying documentary; from policy and regulation to regionality and globalisation; from authorship to ideology; from modernism to postmodernism; from aesthetics to fandom; from histories to futures; this book offers an expansive and clearly structured account of both how and why we study television. Unapologetically ambitious, "Tele-Visions" will both explain and expand our knowledge of the subject, clarifying traditional areas of debate while also setting out new agendas and critical possibilities. It is an essential book for anyone studying television and the media today. Fully illustrated - it includes selected reading guides and full bibliographies that will help students at all levels.
Visa hela texten

GLEN CREEBER is a Senior Lecturer in Film and Television Studies at the University of Wales, Aberystwyth. His books include Dennis Potter, Between Two Worlds (1998) and Serial Television: Big Drama on the Small Screen (2004). He is also editor of The Television Genre Book (2001) and 50 Key Television Programmes (2004).