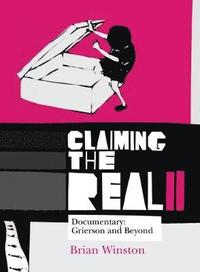 Documentary: Grierson and Beyond

BRIAN WINSTON is the Lincoln Professor of Communications at the University of Lincoln, and has been involved with documentary since 1963. He has an Emmy for documentary scriptwriting; has taught documentary in both the US and the UK; and has long been involved with many international documentary film festivals and the Visible Evidence conference series. Winston first wrote about documentary in 1978. He is the author of a number of books, including Media, Technology and Society: A History, from the Telegraph to the Internet (1998), a volume on "Fires Were Started-" (1999) in the BFI Film Classics series, Lies, Damn Lies and Documentaries (2000) and Messages: Free Expression, Media and the West, from Gutenberg to Google (2005).

Preface I.- Preface to the 2nd edition.- PART I: THE CREATIVE TREATMENT OF ACTUALITY.-The Documentary and CGI.- The Documentary Film in 1914.- The Documentary as the Creative Treatment of Actuality.- PART II: CREATIVE: DOCUMENTARY AS ART.- Photography as Art.- The Documentarist as Explorer/Artist.- The Griersonian Artist.- Documentary Film and Realist Painting.- The Politics of Realism.- Running Away from Social Meaning.- Poor, Suffering Characters: Victims and Problem Moments.- Serious-Minded Chaps: Politics and Poetics.- He Never Used the Word Revolution.- To Command, and Cumulatively Command, the Mind of a Generation.- Running Away from Social Meaning in America.- Staatspolitisch Besonders Wertvoll.- To Win New Comrades for the Cause.- A Curious Comment.- PART III: TREATMENT: DOCUMENTARY AS DRAMA.- Life as Narrativised.- Chrono-Logic.- Non-Narrative: Works Better in the Head than on the Screen.- Sincere and Justifiable Reconstruction.- PART IV: ACTUALITY: DOCUMENTARY AS SCIENCE.- Photography as Science.- Science as Inscription.- Evidence in the Law.- Technologising the Documentary Agenda.- Documentary as Scientific Inscription: Film as Evidence.- Moments of Revelation.- This Objective-Subjective Stuff Is a Lot of Bullshit.- Kinopravda.- Film as Ethnography.- Film as Truth.- The Principles of Visual Anthropology.- Flies in the Soup: The Influence of Cinema Verite.- Flies on the Wall: The Influence of Direct Cinema.- PART V: THE POST-GRIERSONIAN DOCUMENTARY?.- The Naturalistic Illusion.- The Battlefields of Epistomology.- The Difference that Makes a Difference.- What Constraints?.- The Voluntary Consent of the Human Subject.- What Interests the Public.- The Nadir of Human Achievement.- The post-Griersonian Documentary: a tour d'horizon.- The post-Griersonian Documentary: The Farther Shore.- Do Not Be Afraid.....- Envoi.- Notes.- Bibliography.- Index.