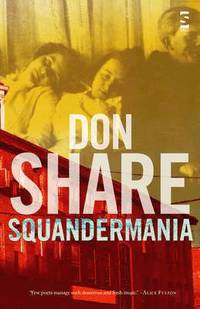 av Don Share
Häftad Engelska, 2007-02-01
139
Köp
Spara som favorit
Skickas inom 10-15 vardagar.
Fri frakt inom Sverige över 159 kr för privatpersoner.
Don Share's latest collection, Squandermania, is a book of poems that are slightly death-haunted and studded with references to marriage and fatherhood, geology and biology. It also revives a luminous, if complex, domesticity - not something most men take as their subject. Its focus is the frenzied energy and unreal depression of living in a world at war with terror, and ultimately with itself. Here the paralysis of long-standing grief and fear combine with strange energy of trying to get by from day to day: "If these are the woods, / I'm not out of them yet." There are poems about the intimate household terrors of marital relations and questions raised by children about what happens in the world, and others woven from a tapestry of literary interactions with sources that range from Burton's Anatomy of Melancholy and Bacon's essay On Building to the "rotten kid theorem." Proverbs cease to reassure as the poet monitors news about global warning, war, and other self-inflicted disasters. What William James called the "trail of the human serpent" that runs over everything has at least (and perhaps finally) brought us to a world in which, as Share describes it, "anti-depressants make certain people violently depressed; / testing a safer system causes reactors to explode; / more freeways create more traffic; / the power grid dims, powerless; / [and] antibiotics make stronger germs." These poems of conscience and imagination record the struggle to continue living in a "glitterbound microcosm" amidst the impulses of maniacal squandering and ceaseless destruction.
Visa hela texten

Share is one of the more gifted craftsman we have writing in America today... There is something ultimately winning about the book's lack of easy salutation, as well as a lot of sly amusement and good will to be found in the purposefully kvetchy parts. 'Squandermania' is a grownup book with grownup concerns, and it apologetically expects more of its reader than a permanently disconnected prose -- Erin Belieu * The Writing Cure * Like those earlier singers, Whitman and Dickey, Don Share discovers again the distinctly American narrative ... I delight in the precision of these chiseled poems and in the sizeable, important ambition of Share's imagination. -- David Baker Share's poems belong to earth and to air, to conscience and to imagination. -- Rosanna Warren A fine poet ... -- Derek Walcott Few poets manage such dexterous and fresh music. -- Alice Fulton

Don Share is Senior Editor of Poetry (Chicago). Previously, he was Curator of Poetry at Harvard University, where he taught and was Poetry Editor of Harvard Review; he has been an editor at Partisan Review and Literary Imagination. His book of poems, Union, was a finalist for the Boston Globe/PEN-New England Winship Award for outstanding book; his other books are Seneca in English (Penguin Classics); I Have Lots of Heart: Selected Poems of Miguel Hernandez (Bloodaxe), which received a Times Literary Supplement/Society of Authors Translation Prize; The Traumatophile (Scantily Clad Press), and a critical edition of Basil Bunting forthcoming from Faber and Faber. He is from Memphis.