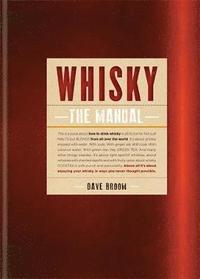 How to Enjoy Whisky

av Dave Broom
Inbunden Engelska, 2014-03-07
179
Bevaka
Spara som favorit
Tillfälligt slut – klicka "Bevaka" för att få ett mejl så fort boken går att köpa igen.
This highly accessible and enjoyable guide is full of practical and fascinating information about how to enjoy whisky. All whisky styles are covered, including (just whisper it) blends. Along the way a good few myths are exploded, including the idea that whisky has to be taken neat. In 'What to Drink', Dave Broom explores flavour camps - how to understand a style of whisky - and moves on to provide extensive tasting notes of the major brands, demonstrating whisky's extraordinary diversity. In 'How to Drink', he sets out how to enjoy whisky in myriad ways - using water and mixers, from soda to green tea; and in cocktails, from the Manhattan to the Rusty Nail. He even looks at pairing whisky and food. In this spirited, entertaining and no-nonsense guide, world-renowned expert Dave Broom dispels the mysteries of whisky and unlocks a whole host of exciting possibilities for this magical drink.
Visa hela texten

The best whisky book ever - it makes every other book I own pretty much obsolete. -- Praise for Dave Broom's The World Atlas of Whisky * Forbes * Broom is a true world authority. * Whisky Advocate *

Award-winning author and whisky expert Dave Broom has been writing about whisky for 25 years as a journalist and author. He has written eight books, two of which (Drink! and Rum) won the Glenfiddich Award for Drinks Book of the Year. He has also won the Glenfiddich Award for Drinks Writer of the Year twice and recently won the extremely prestigious IWSC Communicator of the Year Award. Dave is editor-in-chief of Whisky Magazine: Japan, consultant editor to Whisky Magazine (UK, the USA, France, Spain), and a lead columnist on Whisky Advocate (USA). He is also editor of the Scotch Whisky Review and a contributor to a raft of national and international titles including the Spectator, Mixology, and Imbibe (Europe). He is a regular broadcaster on TV and radio. Over his two decades in the field, Dave has built up a considerable international following with regular training/educational visits to France, Holland, Germany, the USA and Japan. His remit has covered consumer features as well as business reports. He is also actively involved in whisky education, acting as a consultant to major distillers on tasting techniques as well as teaching professionals and the public. He was also one of the developers of Diageo's generic whisky tasting tool, the Flavour Map (TM).