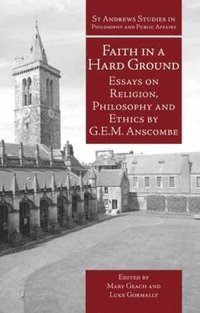 Faith in a Hard Ground

Essays on Religion, Philosophy and Ethics

'Elizabeth Anscombe thought deeply, wrote beautifully, and was never taken in by pretence.' Roger Scruton 'Truly one of the great philosophers of the twentieth century.' Hilary Putnam 'A writer of immense breadth, authority and penetration.' Mary Warnock This is an excellent and unusually rewarding book. ... On every topic Anscombe has something important to say, characteristically something that badly needed saying both when she wrote and now. ... the peculiar interest of these papers lies in the way in which philosophical considerations are brought to bear on theological issues and theological on philosophical. Alasdair MacIntyre (University of Notre Dame), Notre Dame Philosophical Reviews. "Those who did not know her are not perhaps accustomed to seeing approachable humanity in the work of G.E.M. Anscombe, the foremost analytical philosopher of the late 20th century. There is more of it than expected in a collection of her essays on religion and ethics ... In addition to the usual hard-headed explosions of popular fallacies, she gives a moving account of what the presence of God can mean." Christopher Howse, Spectator 14/11/08 "A new collection of [Anscombe's] papers, several unpublished before, gives a fresh insight into the thoughts on religion and ethics of the leading English analytical philosopher of the last half century." Christopher Howse, The Telegraph, 18/11/08 [there is no attempt] to reduce the arcana of religion to something different but more articulable; rather, an ability to illuminate what has to remain mysterious by setting it in the context of what we can and must be clear-headed about. ... Anscombe embraces mystery, though not absurdity or contradiction. A.W. Price (Birkbeck, University of London), Standpoint. Anscombe is acutely sensitive to the multiple layers of meaning found in religious language (something many present-day analytic philosophers of religion are curiously blind to). ... These are essays of great sincerity and power, written with the philosophical care and precision for which Elizabeth Anscombe was justly renowned. John Cottingham (University of Reading), TLS (April 17, 2009). "The essays are searching and analytically brilliant" The Science and Medical Network Review (Winter, 2008). "Anscombe carried out the work that is widely and reasonably judged the twentieth century's outstanding English Catholic philosophical achievement" John Finnis, The National Catholic Bioethics Quarterly, Spring 2009. " The essays are searching and analytically brilliant." The Scientific and Medical Network