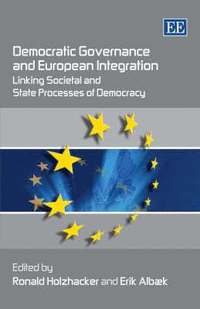 av Ronald Holzhacker, Professor Erik Albaek
Inbunden Engelska, 2007-06-01
1349
Köp
Spara som favorit
Skickas inom 7-10 vardagar.
Fri frakt inom Sverige för privatpersoner.
As the power and scope of the European Union moves further, beyond traditional forms of international cooperation between sovereign states, it is important to analyse how these developments are impacting upon national institutions and processes of democratic representation and legitimacy in the member countries. The authors in this book identify four core processes of democratic governance present in any democratic political system that link societal and state processes of decision-making: opinion formation, interest intermediation, national executive decision-making and national parliamentary scrutiny. From a normative perspective they discuss what impacts this process of Europeanization has on democracy in the evolving system. They conclude that more changes are seen within the state-centric than in the societal-centred processes of democracy, thus the public seems to have been 'left behind' in the process of constructing Europe. The empirical research and normative discussion presented in this book are designed to further our knowledge concerning the Europeanization of social and state processes of democracy and to contribute to the continuing dialogue on democracy in the European Union. This book will be of great interest to academics and researchers of political science, public policy and international relations, as well as those interested in European studies and comparative politics.
Visa hela texten

'. . . the book brings together a very competent group of scholars who cover the volume's theme rather comprehensively, and whose contributions are, at the same time, assembled into a coherent whole. The volume impresses particularly through its empirical richness. It constitutes a valuable contribution to knowledge and should be of interest to scholars and students working on democratic governance, Europeanization and European integration, more generally.' -- Arne Niemann, Acta Politica 'This volume adds a significant new angle to the debate about democracy in Europe. In going beyond the well-established institutional politics at the European level, the contributions to this book take things further by covering in some detail what happens before decisions are taken in Brussels. In particular, the focus on issues such as the role of the media, the involvement of national administrations or the scrutiny of EU decisions by national parliaments provides a more comprehensive picture than we have had so far of "European democracy". This book will be of great interest to scholars and students of European integration.' -- Thomas Christiansen, European Institute of Public Administration, The Netherlands