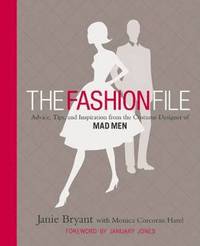 Advice, Tips and Inspiration from the Costume Designer of Mad Men

From Joanie's Marilyn Monroe-esque pencil skirts to Betty's classic Grace Kelly cupcake dresses, the clothes worn by the characters of the phenomenal Mad Men have captivated fans everywhere. Now, women are trading in their khakis for couture and their pumas for pumps. Finally, it's hip to dress well again. Emmy-Award winning costume designer Janie Bryant offers readers a peek into the dressing room of Mad Men, revealing the design process behind the various characters' looks and showing every woman how to find her own leading lady style - whether it's vintage, modern or bohemian. Bryant offers advice to ensure that a woman's clothes convey her personality. She covers everything from where to find incredible vintage clothing and accessories to how to pair those authentic pieces with modern shoes and jeans. And just so the ladies don't leave their men behind there's even a section on making them look a little more Don Draper-dashing.
Visa hela texten

'a peek into the show dressing room...showing every woman how to find her leading lady style' SEW

Emmy-award winning costume designer Janie Bryant creates all of the looks seen on BBC4's Mad Men. She has worked on numerous films and TV shows. In 2005, she won an Emmy for her period costumes on HBO's Deadwood, and this year, she took home the prestigious Outstanding Costume Design award from the Costume Designers Guild.