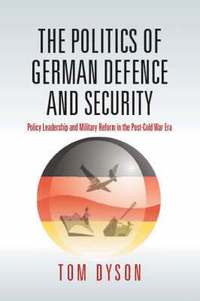 The Politics of German Defence and Security

Policy Leadership and Military Reform in the post-Cold War Era

av Tom Dyson
Inbunden Engelska, 2007-11-01
1159
Köp
Spara som favorit
Specialorder (osäker tillgång). Skickas inom 11-20 vardagar.
Fri frakt inom Sverige för privatpersoner.
Finns även som
Visa alla 1 format & utgåvor
Since the collapse of Communism there has been a dramatic transformation in German Foreign Policy. However, in comparison with its EU and NATO partners, Germany has been reticent to transform its armed forces and defense policy to meet the challenges of peace-keeping and post-conflict reconstruction. This study explains the process and outcome of reforms to the tasks and structure of the German Bundeswehr, demonstrating, in contrast to previous approaches, how the domestic political context and material factors were of crucial importance, despite adaptational pressures from the EU and NATO. The domestic politics of base closures, ramifications for social policy, financial restrictions consequent upon German unification and commitment to EMU's Stability and Growth Pact were critical in determining the outcomes of the reform processes undertaken by post-Cold War defense ministers. It also draws out the important role of policy leaders in the political manipulation of reform and makes an important contribution to the study of German Politics, Europeanization, European Security, Leadership and Policy Studies.
Visa hela texten

"Taking the focus away from ideological considerations Dyson manages to add to the discussion a refined analysis of the domestic political network which influences the outcome of foreign and security policy to a great extend. The relations between the different political subsystems explain policy outcome far better than any ideological approach will ever do." * German Politics "Tom Dyson provides a well-researched overview of the German military in the post Cold War era...The analysis allows the reader not only to follow the evolution of German security and defense policy more broadly from after the Wende through the Schroeder administration, but it also permits a rare look into internal party politics in this area. The book in this way interestingly crosses the domestic/foreign policy lines of most authors whose expertise is one or the other without the background to present the analysis undertaken in this exhaustive, to be recommended, book." * German Politics & Society

Bloggat om The Politics of German Defence and Security

Tom Dyson is a Research Fellow at the International Relations Department, London School of Economics, having previously worked as a Part-Time Lecturer in West European Politics at Birkbeck College, University of London (October 2004-January 2005). He has published articles on German foreign and security policy in European Security and the British Core Executive in the Second World War in Contemporary British History.

Acknowledgements Figures and Tables List of Abbreviations Chapter 1. Explaining the Paradox of German Defense Policy 1990-2005 Germany in Context: Military Reform in Britain and France Explaining the Paradox: Leadership and Culture as a Political Resource The Concept of Policy Leadership Leadership and Policy Studies in Germany Chapter 2. The Bundeswehr in its Historical and Structural Context: The Scope for Policy Leadership The Bundeswehr Policy Subsystem Interlocking and Nested Policy Subsystems: Defense, Security, Foreign, and Budgetary Policy The Three Coalitions in Defense and Security Policy During the Cold War The Post-Cold War World: Unification, New Security Threats, and Responding to U.S. Power Conclusion Chapter 3. Policy Leadership and Bundeswehr Reform During the Kohl Chancellorships: The Art of Varying and Sequencing Roles From the Gulf War to Sarajevo: Helmut Kohl as Policy Leader Developing the Crisis Intervention Role of the Bundeswehr: Volker Ruhe as Policy Entrepreneur and Broker 1992-94 The Structure of the Bundeswehr and the Politics of Base Closures: Volker Ruhe as Policy Broker and Veto Player 1994-98 Leadership within the Defense Ministry: Denkverbot and the Control of Policy Learning Contenders for the Role of Policy Entrepreneur on Bundeswehr Reform: Klaus Kinkel, the Foreign Ministry, the FDP, and the Greens Adapting to Ruhe: The SPD and the Deferral of Bundeswehr Reform Conclusions Chapter 4. Policy Leadership on Bundeswehr Reform During First the Schroder Chancellorship 1998-2002: Managing "Government by Commission" Fanning the Flames of Policy Learning: The Weizsacker Commission The Strategic Context of Bundeswehr Reform: Base Closures, Social Policy, and the CDU/CSU Opposition Rudolf Scharping as Policy Leader: The Marginalisation of the Weizsacker Commission and the Control of Policy Learning Policy Leadership and the Unsuccessful Implementation of Reform Conclusions Chapter 5. Bundeswehr Reform During the Second Schroder Chancellorship 2002-05: The Art of Combining Leadership Roles The Parameters of Reform: Domestic Politics and the "Need for New Think" Struck and the Defense Policy Guidelines (VPR): "Germany Will be Defended on the Hindukush" Combining Leadership Roles to Build Consensus at the Macropolitical Level Struck as Policy Veto Player on Structural Reform: Political Timing and the Control of Policy Learning Conclusions Chapter 6. Military Reform, NATO, and The Common European Security and Defense Policy: Between Atlanticization and Europeanization Theories of Europeanization and German Defense and Security Policy The EU and German Defense and Security Policy During the Kohl Chancellorship Fischer, Scharping, and Europeanization: The Legacy of Opposition Europeanization versus Atlanticization in the Defense Ministry: The Problem of Institutional Credibility Conclusion: A Disjointed Discourse Chapter 7. A Laggard in Military Reform: The Arts of Policy Leadership and the Triumph of Domestic Constraints over International Opportunity Leadership and the Triumph of Domestic Constraint The Implications for German Leadership Studies The Concept of Strategic Culture: Resource as Well as Constraint Europeanization: Leadership and the Management of 'Fit' Bibliography Index