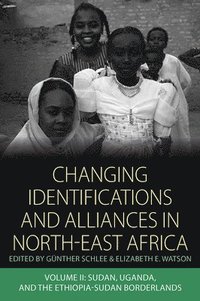 av Gunther Schlee, Elizabeth E Watson
Inbunden Engelska, 2009-10-18
1179
Köp
Spara som favorit
Specialorder (osäker tillgång). Skickas inom 11-20 vardagar.
Fri frakt inom Sverige för privatpersoner.
Forms of group identity play a prominent role in everyday lives and politics in north-east Africa. These volumes provide an interdisciplinary account of the nature and significance of ethnic, religious, and national identity in north-east Africa. Case studies from Sudan, Ethiopia, Uganda, and Kenya illustrate the way that identities are formed and change over time, and how local, national, and international politics are interwoven. Specific attention is paid to the impact of modern weaponry, new technologies, religious conversion, food and land shortages, international borders, civil war, and displacement on group identities. Drawing on the expertise of anthropologists, historians and geographers, these volumes provide a significant account of a society profoundly shaped by identity politics and contribute to a better understanding of the nature of conflict and war, and forms of alliance and peacemaking, thus providing a comprehensive portrait of this troubled region.
Visa hela texten

This in an excellent volume - [that] brings together papers of a uniformly high standard by some of the most experienced and knowledgeable scholars working on this region. ... The papers more than demonstrate the complexity and dynamism of identifications in the region and clearly reflect the insight and experience of long-term researchers in the field. ... It is an original and valuable collection ... which provides a sensitive and nuanced exploration of the meaning of identity in everyday lives as well as in relation to conflict and government.A" * Cherry Leonardi, Durham University

Gunther Schlee was a Professor at Bielefeld until 1999. He currently is the director of the section Integration and Conflict at the Max Planck Institute for Social Anthropology, Halle, focusing on Africa, Central Asia, and Europe. His publications include Identities on the Move: Clanship and Pastoralism in Northern Kenya (International African Institute, 1989), How Enemies are Made (Berghahn, 2008), Rendille Proverbs in their Social and legal Context (with Karaba Sahado) and Boran Proverbs in their Cultural Context (with Abdullahi Shongolo) (both Cologne: Rudiger Koppe). Elizabeth E. Watson is a Lecturer in the Department of Geography at the University of Cambridge. Her research examines environment and development issues, mainly in Eastern Africa. Most of her work in Ethiopia has been among the Konso. Recent publications include: 'Local Community, Legitimacy, and Cultural Authenticity in Postconflict Natural Resource Management: Ethiopia and Mozambique' in Environment and Planning D: Society and Space, 2006 (with R. Black), and 'Making a Living in the Post-Socialist Periphery: Konso, Ethiopia' in Africa, 2006.