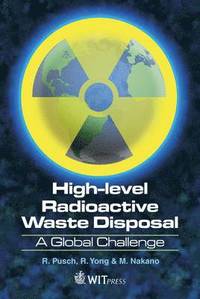 av Roland Pusch, Raymond N Yong, Masashi Nakano
Inbunden Engelska, 2011-06-30
2109
Köp
Spara som favorit
This book describes all the techniques and procedures required for designing and constructing a repository for hazardous waste and for assessing its function in short- and long-term perspectives. It provides new aspects on disposal of such waste, especially HLW, by making it clear that, in contrast to the common belief that the rock itself it an effective barrier to the transport of contaminants like radionuclides, tectonics and long-term changes in the rock structure will make it serve only as a 'mechanical support to the chemical apparatus', while effective retention of the hazardous elements is solely provided by properly designed and manufactured containers ('canisters'). This brings the longevity of the containers in to focus, which in turn, requires that all degrading physics/chemical processes are considered. This occupies a considerable part of the book.
Visa hela texten

Roland Pusch (PhD Geotechnique, PhD Geology) is the author or co-author of several books on rock geomechanics, has been a professor of rock and soil mechanics, and has served on the editorial boards of international journals. Long involved in research on clay buffers for containment of nuclear waste, his current research is on their longevity. Raymond N. Yong, CQ, MSc, MEng, PhD, CEng, FRS(C), is Emeritus Professors of McGill University. He has been the recipient of the Killam Prize (Canada's highest scientific prize), the ASTM's Charles Dudley Prize, the Canadian Geotechnical Society's Legget Prize, and the Canadian Environmental Achievement Award (Lifetime Achievement), from Environment Canada. A Fellow of the Royal Society Canada and a Chevalier de l'Ordre National du Quebec, he is an authority on contaminated soil and its mitigation, an international consultant on hazardous waste disposal, and the author or co-author of numerous books and papers in the field. He was involved in the early research on clay barriers for containment of radioactive waste. Masashi Nakano, PhD, Professor Emeritus, The University of Tokyo, is the recipient of the 2007 International award from the International Society of Paddy and Water Environmental Engineering and the 2009 Groundwater award from the Japan Association of Groundwater Hydrology. He has written numerous papers in the field of soil physics. He has served with the Japan Atomic Energy Agency and its predecessors and has been involved with planning for the disposal of radioactive waste in Japan since the beginning. His current research involves clay science.