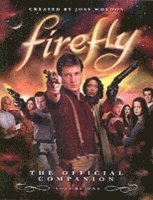 av Joss Whedon
Häftad Engelska, 2006-08-01
219
Köp
Spara som favorit
Skickas inom 7-10 vardagar.
Gratis frakt inom Sverige över 159 kr för privatpersoner.
Before the smash hit movie "Serenity" came "Firefly", the cult TV series which started it all and became a DVD phenomenon, selling almost half a million copies. Set 500 years in the future, "Firefly" centres around Mal Reynolds, captain of the ship-for-hire Serenity and its eclectic crew of galactic misfits. When he takes on two passengers, a young doctor and his mysterious, telepathic sister, he gets much more than he bargained for...This official companion is just what the show's fervent fans, the 'Browncoats', have been waiting for, with unseen photos, scripts, behind the scenes secrets, and exclusive input from the cast and crew, including of course creator Joss Whedon.
Visa hela texten

"George Lucas could learn a thing or two from Whedon" - Newsday"

Joss Whedon is the creator of and guiding light behind Firefly, Buffy the Vampire Slayer and Angel. He is also the Oscar-nominated writer of Toy Story, and Speed. Serenity, which he also wrote, was his feature film debut as director, and continued the story from Firefly. He is currently writing a Wonder Woman movie, which he will also direct.