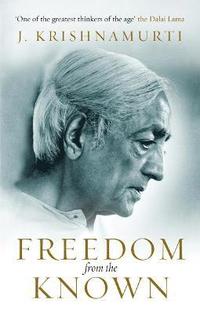 Freedom from the Known

av J Krishnamurti
Häftad Engelska, 2010-07-01
100
Köp
Spara som favorit
Finns även som
Visa alla 2 format & utgåvor
Born in poverty in India, Jiddu Krishnamurti (1895-1986) became a leading spiritual and philosophical thinker whose ideas continue to influence us today. George Bernard Shaw declared that he was the most beautiful human being he had ever seen and Aldous Huxley was one of his close friends. Whether debating politics with Nehru, discussing theories with Rupert Sheldrake and Iris Murdoch, or challenging his students not to take his words at face value, Krishnamurti engaged fully with every aspect of life. He is regarded by many modern religious figures as a great teacher, an extraordinary individual with revolutionary insights; Joseph Campbell, Alan Watts, Eckhart Tolle and Deepak Chopra are all indebted to his writings. Freedom from the Known is one of Krishnamurti's most accessible works. Here, he reveals how we can free ourselves radically and immediately from the tyranny of the expected. By changing ourselves, we can alter the structure of society and our relationships. The vital need for change and the recognition of its very possibility form an essential part of this important book's message.
Visa hela texten

Jiddu Krishnamurti was born on 12 May, 1895 in Madanapalle, India. In early adolescence he came to the attention of the influential theosophist C W Leadbeater, who educated him, believing him to be a future world leader. Krishnamurti later broke away from the Theosophical Society and travelled internationally as an independent speaker and writer on philosophical subjects. In later life, he addressed the United Nations on the subject of peace and awareness and was awarded the 1984 UN Peace Medal. He died in 1986 at his home in Ojai, California.