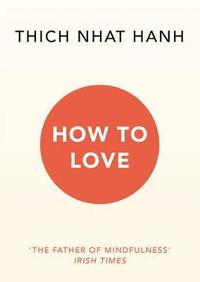 av Thich Nhat Hanh
Häftad Engelska, 2016-07-07
79
Köp
Spara som favorit
Finns även som
Visa alla 4 format & utgåvor
How to Love is part of a charming series of books from Zen Master, Thich Nhat Hanh, exploring the essential foundations of mindful meditation and practise. How to Love shows that when we feel closer to our loved ones, we are also more connected to the world as a whole. Nhat Hanh brings his signature clarity, compassion and humour to the thorny question of how to love and distils one of our strongest emotions down to four essentials: you can only love another when you feel true love for yourself; love is understanding; understanding brings compassion; and deep listening and loving speech are key ways of showing our love.
Visa hela texten

Born in Hue, Vietnam, Thich Nhat Hanh was a Buddhist Zen Master, poet, scholar and human rights activist. In 1967, he was nominated for the Nobel Peace Prize by Martin Luther King. He founded the Van Hanh Buddhist University in Saigon, the School of Youth and Social Service and the Plum Village Buddhist community and meditation centre in France, where he lived for many years. He was the author of many acclaimed books including Peace is Every Step, Old Path White Clouds and Fear, which have sold millions of copies around the world. In 2018, he returned to Vietnam to live at the Tu Hieu Temple, where he was first ordained when he was sixteen years old. He died on 22nd January 2022, at the age of 95.