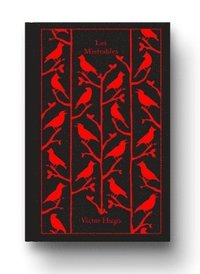 av Victor Hugo
(2 röster)
Inbunden Engelska, 2012-10-25
196
Köp
Spara som favorit
Finns även som
Visa alla 9 format & utgåvor
Victor Hugo's tale of injustice, heroism and love follows the fortunes of Jean Valjean, an escaped convict determined to put his criminal past behind him. But his attempts to become a respected member of the community are constantly put under threat: by his own conscience, when, owing to a case of mistaken identity, another man is arrested in his place; and by the relentless investigations of the dogged Inspector Javert. It is not simply for himself that Valjean must stay free, however, for he has sworn to protect the baby daughter of Fantine, driven to prostitution by poverty. Norman Denny's lively English translation is accompanied by an introduction discussing Hugo's political and artistic aims in writing Les Miserables. Victor Hugo (1802-85) wrote volumes of criticism, dramas, satirical verse and political journalism but is best remembered for his novels, especially Notre-Dame de Paris (also known as The Hunchback of Notre-Dame) and Les Miserables, which was adapted into one of the most successful musicals of all time. 'All human life is here' Cameron Mackintosh, producer of the musical Les Miserables 'One of the half-dozen greatest novels of the world' Upton Sinclair 'A great writer - inventive, witty, sly, innovatory' A. S. Byatt, author of Possession
Visa hela texten

"Hugo's genius was for the creation of simple and recognizable myth. The huge success of Les Miserables as a didactic work on behalf of the poor and oppressed is due to his poetic and myth-enlarged view of human nature." -V. S. Pritchett "It was Tolstoy who vindicated [Hugo's] early ambition by judging Les Miserables one of the world's great novels, if not the greatest... [His] ability to present the extremes of experience 'as they are' is, in the end, Hugo's great gift." -From the Introduction by Peter Washington

Victor Hugo (1802-85) was the most forceful, prolific and versatile of French nineteenth-century writers. He wrote Romantic costume dramas, many volumes of lyrical and satirical verse, political and other journalism, criticism and several novels, the best known of which are Les Miserables (1862) and the youthful Notre-Dame de Paris (1831). A royalist and conservative as a young man, Hugo later became a committed social democrat and during the Second Empire of Napoleon III was exiled from France, living in the Channel Islands. He returned to Paris in 1870 and remained a great public figure until his death: his body lay in state under the Arc de Triomphe before being buried in the Pantheon.