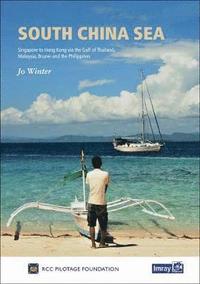 Singapore to Hong Kong via the Gulf of Thailand, Malaysia, Brunei, the Philippines and Taiwan

av Imray, Rccpf, Jo Winter
Inbunden Engelska, 2019-09-17
999
Köp
Spara som favorit
Specialorder (osäker tillgång). Skickas inom 11-20 vardagar.
Fri frakt inom Sverige för privatpersoner.
For the past 12 years, Jo Winter has been cruising these waters in her 45' Island Packet, Brother Wind, and she describes it as one of the most diverse, beautiful, unspoilt and undiscovered sailing areas in the world. The book covers thousands of miles of coastline, a multitude of islands and inland up many of the region's navigable rivers. Along with a comprehensive range of information to help with planning a cruise in this region, the introductory section details weather information, including coverage of typhoons, and also indicates piracy risk areas to be avoided. Sailing directions include small scale area plans to orientate the navigator and larger scale plans to show details of harbours and anchorages. Full colour throughout, the plans and numerous photographs illustrate key features and places. Whether transiting the region or planning a more extended cruise along any of the coastlines bordering the South China Sea, this guide is an essential companion.
Visa hela texten

Imray Laurie Norie & Wilson Ltd was formed in 1904 when three private chart publishing firms amalgamated. Each of these London companies had a long history going back to the mid-18th century. James Imray and Son published an extensive list of charts and pilot books. RH Laurie and Sons was associated with charts published for the East India Company. Norie and Wilson, founded by JW Norie, whose Nautical Tables are still supplied to navigators across the world, produced charts and books on navigation and sold nautical instruments.Until 1939 we were based in the City of London, where long serving cartographers produced charts from copper plate engravings which were supplied to mariners throughout the World. For over a century Blueback Charts were the first choice of many shipping companies. Now based in St Ives in Cambridgeshire, Imray charts are produced digitally for printed and electronic editions by our drawing office team. Our catalogue of yachting charts is regarded by the sailing community as the most comprehensive available. Our paper charts are complemented by a growing list of electronic publications and high quality pilot books by leading authors.