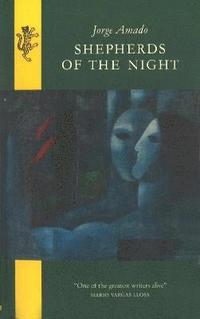 Shepherds Of The Night

av Jorge Amado
Häftad Engelska, 2015-05-18
129
Köp
Spara som favorit
Skickas inom 7-10 vardagar.
Fri frakt inom Sverige över 159 kr för privatpersoner.
A big, brawling novel of waterfront life in Bahia, packed with cardsharpers, prostitutes, pimps, drunks and homeless Don Juans and Messalinas. It tells three interlinked and cumulating stories - about a marriage, a christening and a siege. The things that happen in Shepherds of the Night are bound to happen once the cleverest of the Don Juans marries an out-of-town prostitute and tires of her; once an unmarried mother insists on a church christening for her fatherless child; and once a group of homeless Bahians erect their shacks on private property.
Visa hela texten

Jorge Amado is Brazil's most illustrious and venerable novelist * New York Times * Amado's humour is fresh, innocent, and inventive, and his altogether delightful comedy...has been given an exceptionally good translation * New Yorker * Amado is by turns realist, fantasical, episodic, direct, angry, humorous and, above all, characterful * Scotsman * His books are on the grand scale, long, lavish, highly coloured, exuberant * Times Literary Supplement * Not only is Jorge Amado oneo f the greatest writers[...] he's also one of the most entertaining -- Mario Vargas Llosa

Bloggat om Shepherds Of The Night

Jorge Amado was one of the greatest Brazilian writers of the twentieth century. His twenty-one novels are distinguished by a passionate concern for social justice and a tender but exuberant vision of the comedy of life. They have been translated into forty-six languages and published in sixty countries. He died in August 2001, aged 88.