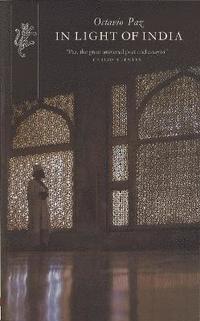 In Light Of India

av Octavio Paz
Häftad Engelska, 2015-02-09
249
Köp
Spara som favorit
Specialorder (osäker tillgång). Skickas inom 11-20 vardagar.
Fri frakt inom Sverige för privatpersoner.
In 1951 Octavio Paz travelled to India to serve as an attache in the Mexican Embassy. Eleven years later he returned as Mexico's ambassador. In Light of India is Paz's celebration of that country and his most personal work of prose to date. As in all of his essays, he brings poetic insight and voluminous knowledge to bear on the subject, and the result is a series of fascinating discourses on India's landscape, culture and history. 'The Antipodes of Coming and Going' is a lyrical remembrance of Paz's days in India, evoking with astonishing clarity the sights, sounds, smells and denizens of the subcontinent. 'Religions, Castes, Languages' gives a survey of Indian history and its astonishing polyglot society. 'A Project of Nationhood' is an examinatino of modern Indian politics, comparing the respective Islamic, Hindu and Western civilizations through the course of history. 'The Full and the Empty' is an exploration of what Paz calls the soul of India, its art, literature, music and philosophy. It is also an uncompromising indictment of the self-centred materialism of Western society.
Visa hela texten

Bloggat om In Light Of India

Octavio Paz, celebrated poet, diplomat and essayist, was born in 1914 in Mexico City. He began to write at an early age and went on to become a critic and translator, teaching at Cambridge and Harvard Universities. He also served as a diplomat and was Mexican ambassador to France and India. Alongside Pablo Neruda and Jorge Luis Borges, Paz's work has influenced the politics and culture both of his own country and of the world. He received the Miguel de Cervantes Prize in 1981, and the Nobel Prize in Literature in 1990. He died in 1998.