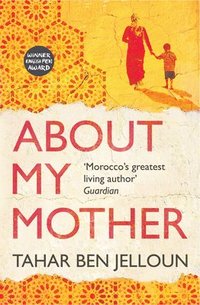 av Tahar Ben Jelloun
Häftad Engelska, 2016-07-04
99
Köp
Spara som favorit
Skickas inom 10-15 vardagar.
Fri frakt inom Sverige över 159 kr för privatpersoner.
Finns även som
Visa alla 1 format & utgåvor
Longlisted for the EBRD Literature Prize Since she's been ill, Lalla Fatma has become a frail little thing with a faltering memory. Lalla Fatma thinks she's in Fez in 1944, where she grew up, not in Tangier in 2000, where this story begins. She calls out to family members who are long dead and loses herself in the streets of her childhood, yearning for her first love and the city she left behind. By her bedside, her son Tahar listens to long-hidden secrets and stories from her past: married while still playing with dolls and widowed for the first time at the age of sixteen. Guided by these fragments, Tahar vividly conjures his mother's life in post-war Morocco, unravelling the story of a woman for whom resignation was the only way out. Tender and compelling, About My Mother maps the beautiful, fragile and complex nature of human experience, while paying tribute to a remarkable woman and the bond between mother and son.
Visa hela texten

'Ben Jelloun is arguably Morocco's greatest living author, whose impressive body of work combines intellect and imagination in magical fusion' Guardian; 'In any language, in any culture, Tahar Ben Jelloun would be a remarkable novelist' Sunday Telegraph; 'One of Morocco's most celebrated and translated writers' Asymptote; 'A traditional storyteller whose tales have the status of myth ... An important writer.' Times Literary Supplement; 'About My Mother pulses with life, invigorating the reader with every sentence.' World Literature Today; `A beautifully crafted novel' The New Arab

Bloggat om About My Mother

Born in Fez, Morocco, Tahar Ben Jelloun is an award-winning and internationally bestselling novelist, essayist, critic and poet. Regularly shortlisted for the Nobel Prize in Literature, he has won the Prix Goncourt and the International IMPAC Dublin Literary Award. His work has also been shortlisted for the Independent Foreign Fiction Prize. He received the rank of Officier de la Legion d'honneur in 2008. Some of his works in English translation include This Blinding Absence of Light, A Palace in the Old Village, The Sand Child and Racism Explained to My Daughter. Ros Schwartz has translated a wide range of Francophone fiction and non-fiction writers including Andree Chedid, Aziz Chouaki, Fatou Diome, Dominique Manotti and Dominique Edde. She was made Chevalier dans l'Ordre des Arts et des Lettres for her services to literature in 2009.Lulu Norman has translated the work of Mahi Binebine, Albert Cossery, Mahmoud Darwish, Amin Maalouf and the songs of Serge Gainsbourg. Her translations have been shortlisted for the International IMPAC Dublin Literary Award, Independent Foreign Fiction Prize and Best Translated Books Award, among others.