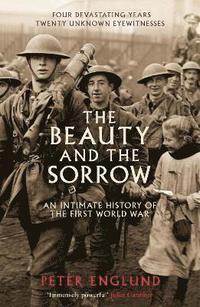 The Beauty And The Sorrow

An intimate history of the First World War

av Peter Englund
Häftad Engelska, 2012-09-06
169
Köp
Spara som favorit
Finns även som
Visa alla 2 format & utgåvor
There are many books on the First World War, but award-winning and bestselling historian Peter Englund takes a daring and stunning new approach. Describing the experiences of twenty ordinary people from around the world, all now unknown, he explores the everyday aspects of war: not only the tragedy and horror, but also the absurdity, monotony and even beauty. Two of these twenty will perish, two will become prisoners of war, two will become celebrated heroes and two others end up as physical wrecks. One of them goes mad, another will never hear a shot fired. Following soldiers and sailors, nurses and government workers, from Britain, Russia, Germany, Australia and South America - and in theatres of war often neglected by major histories on the period - Englund reconstructs their feelings, impressions, experiences and moods. This is a piece of anti-history: it brings this epoch-making event back to its smallest component, the individual.
Visa hela texten

Peter Englund is one of the finest writers of our time on the tactics, the killing and the psychology of war. In The Beauty and the Sorrow he superbly and humanely brings to life all the tragedy, chaos, death and gunsmoke of battle -- Simon Sebag Montefiore A wonderfully wide and rich mosaic of personal experience from the First World War -- Antony Beevor Extraordinary ... a work of magnificent, elegiac seriousness * Guardian * A haunting mosaic of the experiences of war. The layers of voices build to create a richly complex and rarely heard account of the First World War that lingers in the memory long after the final page. Immensely powerful. -- Juliet Gardiner, author of 'The Blitz' He conjures up the atmosphere over and over again with just a few stark words. I loved all the detail... inspiring. * Margaret Forster * By turns pithy, lyrical, colourful, poignant and endlessly absorbing. An exquisite book. * Kirkus Reviews (starred) * A brilliant feat of retrospective journalism * Publishers Weekly (starred) * Intense and bighearted . . . Englund's volume joins an unconventional pantheon . . . The accounts of [these] lives can be terrifying or stirring, but are most fully alive in Englund's accumulation of small moments, stray details . . . His book has the most devastating ending I can remember in a piece of nonfiction. -- Dwight Garner * New York Times * Like no other, this book brings out in a poignant and effective way the meaning of World War I for those who lived through it -- Prof Sir Lawrence Freedman

Peter Englund is an award-winning, bestselling Swedish historian. Having been a professor at Uppsala University, in 2008 he was appointed the new Permanent Secretary of Swedish Academy, the body that awards the Nobel Prize in Literature. His breakthrough book on the Battle of Poltava was published to universal critical acclaim and sold over 250,000 copies in Sweden alone.