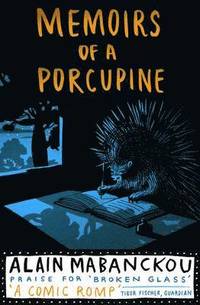 Memoirs Of A Porcupine

av Alain Mabanckou
Häftad Engelska, 2011-05-05
169
Köp
Spara som favorit
Skickas inom 10-15 vardagar.
Fri frakt inom Sverige för privatpersoner.
Finns även som
Visa alla 1 format & utgåvor
All human beings, says an African legend, have an animal double. Some are benign, others wicked. When Kibandi, a boy living in a Congolese village, reaches the age of eleven, his father takes him out into the night, and forces him to drink a vile liquid from a jar which has been hidden for years in the earth. This is his initiation. From now on he, and his double, a porcupine, become accomplices in murder. They attack neighbours, fellow villagers, people who simply cross their path. Throughout his life Kibandi relies on his double to act out his grizzly compulsions, until one day even the porcupine baulks, and turns instead to literary confession.
Visa hela texten

Praise for Broken Glass: A dizzying combination of erudition, bawdy humour and linguistic effervescence -- Melissa McClements * Financial Times * Broken Glass is a comic romp that releases Mabanckou's sense of humour. Although its cultural and intertextual musings could fuel innumerable doctorates, the real meat of Broken Glass is its comic brio, and Mabanckou's jokes work the whole spectrum of humour -- Tibor Fischer * Guardian * Deserves the acclaim heaped upon it... a thought-provoking glimpse into a stricken country * Waterstone's Books Quarterly * Broken Glass proves to be an obsessive, slyly playful raconteur... the prose runs wild to weave endless sentences, their rhythm and pace attuned to the narrator's rhetorical extravagances... With his sourly comic recollections, Broken Glass makes a fine companion -- Peter Carty * Independent * An incredibly funny novel, often rueful, on the edge of tragedy and imbued with the spirit of the French classics. There's a tremendous spirit, irreverence and humour in this book -- Boyd Tonkin, Chair of the Judges for the Independent Foreign Fiction Prize 2010 Mabanckou's narrative gains an uplifting momentum of its own -- Emma Hagestadt * Independent * Mabanckou's irreverent wit and madcap energy have made him a big name in France... surreal -- Giles Foden * Conde Nast Traveller * Magical realism meets black comedy in an excellent satire by an inventive and playful writer -- Alastair Mabbott * Herald * Africa's Samuel Beckett ... Mabanckou's freewheeling prose marries classical French elegance with Paris slang and a Congolese beat. It weds the oral culture of his mother to an omnivorous bibliophilia encouraged by his stepfather ... [Memoirs of a Porcupine] draws on oral lore and parables in its sly critique of those who use traditional beliefs as a pretext for violence * The Economist *

Alain Mabanckou was born in 1966 in the Congo. He currently lives in LA, where he teaches literature at UCLA. One of Africa's major writers, he is the author of six volumes of poetry and six novels. He received the Subsaharan African Literature Prize for Blue-White-Red, and the Prix Renaudot for Memoirs of a Porcupine. He was selected by the French journal Lire as one of the fifty writers to watch out for this coming century.