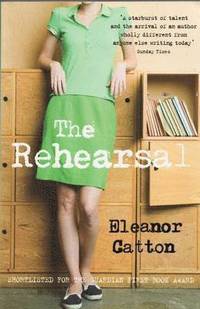 av Eleanor Catton
Häftad Engelska, 2010-03-04
115
Köp
Spara som favorit
Kan tyvärr inte levereras innan julafton.
A high-school sex scandal jolts a group of teenage girls into a new awareness of their own potency and power. The publicity seems to turn every act into a performance and every platform into a stage. But when the local drama school decides to turn the scandal into a show, the real world and the world of the theatre are forced to meet, and soon the boundaries between private and public begin to dissolve ... The Rehearsal is an exhilarating and provocative novel about the unsimple mess of human desire, at once a tender evocation of its young protagonists and a shrewd expose of emotional compromise.
Visa hela texten

'As debuts go, this one is astral - as well as teasing, intelligent and knowing - Catton anatomises brilliantly the psychology of youth, its sexual mores, it's posing pretentiousness, its worries, its bravado - So much accomplishment carried so lightly' Scotsman 'It represents a starburst of talent and the arrival of an author wholly different from anyone else writing today' Sunday Times 'Timeframes overlap and collide in this ingenious ontological kaleidoscope of a debut, but the experimentalism - which demands that the reader keep all her wits about her - is tempered by a real knack for narrative and a cast of painfully familiar teenage characters who are all desperate to be as confident, cool, charismatic and funny as possible. These are qualities that the extraordinary Eleanor Catton has in spades' The Times 'The Rehearsal is no rehearsal. It's a supremely confident piece of writing - the clarity of its thought and language make it a definite contender for debut of the year' Independent 'Brilliant - What Catton does so strikingly, and in such honeyed prose, is to capture the essence of adolescents - Catton has formidable talent' Daily Mail 'This astonishing debut novel from young New Zealander Eleanor Catton is a cause for surprise and celebration: smart, playful and self-possessed, it has the glitter and mystery of the true literary original - the prose is so arresting, the storytelling so seductive, that wherever the book falls open it's near-impossible to put down' Guardian

Eleanor Catton was born in 1985 in Canada and raised in New Zealand, where she has won several prizes for this, her first novel, including the 2009 Montana Best First Book Award and the 2008 Glenn Schaeffer Fellowship to the Iowa Writers' workshop