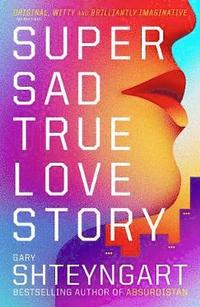 av Gary Shteyngart
Häftad Engelska, 2011-03-03
119
Köp
Spara som favorit
Skickas inom 7-10 vardagar.
Fri frakt inom Sverige över 159 kr för privatpersoner.
Kan levereras innan jul!
Finns även som
Visa alla 3 format & utgåvor
In a very near future, a functionally illiterate America is about to collapse. But don't tell that to poor Lenny Abramov, proud author of what may well be the world's last diary. Despite his job at an outfit called 'Post-Human Services', which attempts to provide immortality for its super-rich clientele, death is clearly stalking this cholesterol-rich morsel of a man. And why shouldn't it? Lenny's from a different century. He TOTALLY loves books (or 'printed, bound media artifacts' as they're now known), even though most of his peers find them smelly and annoying. But even more than books, Lenny loves Eunice Park, an impossibly cute and impossibly cruel twenty-four-year-old Korean-American woman who just graduated from Elderbird College with a major in 'Images' and a minor in 'Assertiveness'. When riots break out in New York's Central Park, the city's streets are lined with National Guard tanks and patient Chinese creditors look ready to foreclose on the whole mess, Lenny vows to convince his fickle new love that in a time without standards or stability, there is still value in being a real human being.
Visa hela texten

"Gary Shteyngart's wonderful new novel, "Super Sad True Love Story," is a supersad, superfunny, superaffecting performance -- a book that not only showcases the ebullient satiric gifts...but that also uncovers his abilities to write deeply and movingly about love and loss and mortality. It's a novel that gives us a cutting comic portrait of a futuristic America, nearly ungovernable and perched on the abyss of fiscal collapse, and at the same time it is a novel that chronicles a sweetly real love affair as it blossoms from its awkward, improbable beginnings. Mr. Shteyngart spent his earliest childhood in Leningrad, then moved with his family to the United States, and "Super Sad" reflects his dual heritage, combining the dark soulfulness of Russian literature with the antic inventiveness of postmodern American writing; the tenderness of the Chekhovian tradition with the hormonal high jinks of a Judd Apatow movie...It demonstrates a new emotional bandwidth and ratifies his emergence as on

GARY SHTEYNGART was born in Leningrad in 1972 and moved to the United States with his family seven years later. He is the author of two previous novels: The Russian Debutante's Handbook, named one of the best debuts of the year by the Guardian, and the bestselling Absurdistan. His work has appeared in the New Yorker, Granta, Esquire and GQ, and his books have been translated into over twenty languages.