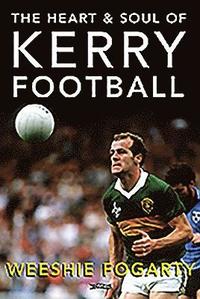 The Heart and Soul of Kerry Football

av Weeshie Fogarty
Inbunden Engelska, 2016-09-05
369
Bevaka
Spara som favorit
Tillfälligt slut – klicka "Bevaka" för att få ett mejl så fort boken går att köpa igen.
Finns även som
Visa alla 1 format & utgåvor
Why has Kerry, in the rugged south-west, won more All-Ireland Gaelic football championships than any other county? It's a fascinating question, and The Heart & Soul of Kerry Football provides plenty of answers. Weeshie Fogarty tells stories about the great players he played with and against, Kerry's intense rivalries and its outstanding captains. He extols the handing down of a unique tradition, and explains why the increasing profile of girls and women bodes well for the future of the sport. Weeshie also selects his all-time most skilful/classy/stylish team, which is sure to spark debate in the homes and pubs of Kerry. Gaelic football is the very heartbeat of Irish life and culture, both in the Kingdom and beyond, and players and coaches from the most successful county have grown the sport in Ireland and internationally. This unique book reveals the living heart and soul of Kerry football.
Visa hela texten

a very aptly named book, packed with references and observations from someone who very accurately reflects the reality in the title ... I have no hesitation in strongly recommending it -- Kerry's Eye promises to be one of the finest insights into a GAA culture to ever grace the bookshelves and is most certainly worthy of every sporting book list this coming Autumn -- the42.ie Many great books have been written over the years that skim the surface of what exactly makes Kerry Football tick. But Weeshie's narrative proves that he, perhaps, has come closer than most to finding out ... this book is a great opportunity to sit back and remind yourself again of why exactly Kerry is still, and always will be, the greatest footballing county in Ireland. All is not lost, far from it in fact. -- The Kerryman getting stuck into a copy of Weeshie Fogarty's new book - The Heart & Soul of Kerry Football - less than 48 hrs after another heart-breaking defeat to Dublin, proved just the sort of tonic I needed -- The Kerryman recommended reading for anyone interested in the Kerry football story -- Killarney Advertiser a nugget-filled dance through Kerry's history by the legendary broadcaster -- Irish Times a concise exploration of Kerry footballing culture past and present by one of the county's top commentators and personalities -- Irish Independent plenty to recommend ... well-written -- Gaelic Life Magazine there has never been much about Kerry football that Weeshie doesn't know, and it shows -- Kerry's Eye

Bloggat om The Heart and Soul of Kerry Football

One of Ireland's best-known sports broadcasters, Weeshie Fogarty was a true sports fan. An All Ireland winning player for Kerry, and referee at the highest level, he also represented Ireland at all levels in basketball. His Terrace Talk programme on Radio Kerry had a fanatical following. Weeshie died in 2018.

DRAFT CHAPTER OUTLINE Ethos of Kerry - introduction Childhood - 'First Football' (received as sample text), Weeshie's childhood, other childhood experiences from interviews Decades of Champions, based on interviews, observations, records: *1950's - Sean Murphy *1960's - Mick O'Connell *1970's - Jack O'Shea *1980's - Ambrose Sullivan *1990's - Maurice Fitzgerald *2000's - Dara O Cinneide *2000+ - Declan O'Sullivan Kerry Failures - dark times of the 1950's and 60's. Supporters - believing in the Kingdom, stories/examples Kerry Training - open and shut Running the Kingdom - county boards through the decades Facilities from the hedges to the stadiums The Kingdom and the Empire - Radio Kerry, NY & Boston immigrants, global supporters Heart and Soul of Kerry - 'Farewell to John Moriarty' (received as sample text) The book will be written by Weeshie based on existing interviews and articles, new research, new interviews, and the author's extensive personal experiences as a player, commentator and fan. Weeshie agrees to develop this draft structure further, as required. Illustrations will be supplied by Weeshie - a mix of old and new covering the historical period of the book. Sample pics to be supplied in advance.