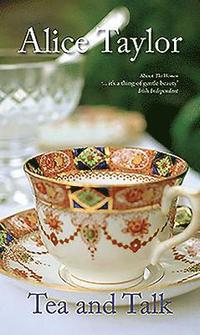 av Alice Taylor
Häftad Engelska, 2017-06-05
139
Köp
Spara som favorit
Skickas inom 7-10 vardagar.
Fri frakt inom Sverige över 159 kr för privatpersoner.
Finns även som
Visa alla 1 format & utgåvor
Relax with Alice, sit and chat over a cup of tea, as she invites you into her life. See an old press overflowing with the linen collection of two generations, the oil lamps and clocks inherited and collected over many years, and the books of people who once lived here. Alice tells you of the sad loss of her beautiful dogs Kate and Lolly, friends of the heart, and takes you around her village to meet her neighbours, join a meitheal to plant trees, and visit the fairy doors in the nearby wood. But Alice's home and community are not a perfect place: hear about the split in the local GAA club, blocked off rights of way, the donations of the local canine population on the footpaths! Visit a restored famine graveyard and hear about the landlords who once owned this village and the landmarks they left on the landscape and the people. This is life in a small Irish village in 2016, one hundred years after the Rising. This Bestselling book is coming in paperback edition.
Visa hela texten

like all her previous books, it's a truly beautiful read that left me feeling warm and fuzzy ... of all the villages, if I could pick a village to live in, it's Innishannon ... I loved it from cover to cover ... it made me smile -- The Patricia Messenger Show, Cork's C103 a delight -- The Sean O'Rourke Show, RTE Radio 1 One of the lovely things is that you invite readers in the book into your garden and into your house ... such a positive message about what life can be like in rural Ireland ... beautiful ... gorgeous photographs -- Clare FM's Morning Focus not alone is the writing beautiful ... most fantastic pictures -- MidWest Radio's Tommy Marren Show a surefire hit with older members of the family -- Belfast Telegraph one to warm the heart this winter -- Connacht Tribune one of the country's most accomplished storytellers -- Irish Mail on Sunday one to warm the heart this winter -- Galway City Tribune a fascinating read -- Southern Star one of this country's best-loved authors ... I got great satisfaction from reading your book because you make perfect sense and you write in such a beautiful way ... a fantastic read ... this book is all about village life and rural life and it also highlights the importance of neighbours and community and volunteerism and parish ... it's a great read and it's that time of year when we're thinking: imagine the Christmas stocking is all ready, and it's a must as far as I'm concerned ... the people of this wonderful country of ours could identify with her every word -- The Joe Finnegan Show, Shannonside Northern Sound

Alice Taylor lives in the village of Innishannon in County Cork, in a house attached to the local supermarket and post office. Since her eldest son has taken over responsibility for the shop, she has been able to devote more time to her writing. Alice Taylor worked as a telephonist in Killarney and Bandon. When she married, she moved to Innishannon where she ran a guesthouse at first, then the supermarket and post office. She and her husband, Gabriel Murphy, who sadly passed away in 2005, had four sons and one daughter. In 1984 she edited and published the first issue of Candlelight, a local magazine which has since appeared annually. In 1986 she published an illustrated collection of her own verse. To School Through the Fields was published in May 1988. It was an immediate success, and quickly became the biggest selling book ever published in Ireland. It launched Alice on a series of signing sessions, talks and readings the length and breadth of Ireland. Her first radio interview, forty two minutes long on RTE Radio's Gay Byrne Show, was the most talked about radio programme of 1988, and her first television interview, of the same length, was the highlight of the year on RTE television's Late Late Show. Since then she has appeared on radio programmes such as Woman's Hour, Midweek and The Gloria Hunniford Show, and she has been the subject of major profiles in the Observer and the Mail on Sunday. Alice has written nearly twenty books since then, large exploring her village of Inishannon, and the way of life in rural Ireland. She has also written poetry and fiction: her first novel, The Woman of the House, was an immediate bestseller in Ireland, topping the paperback fiction lists for many weeks. One of Ireland's most popular authors, her most recent book is And Life Lights Up. Emma Byrne is a graphic designer and artist. She is a graduate of Central Saint Martins School of Art and Design. She has won numerous awards for her design including The IDI (Irish Design Institute) Graduate Designer of the Year, the IDI Promotional Literature Award for her work on Brown Morning, and a Children's Books Ireland Bisto Merit Award for her work on Something Beginning With P: New Poems from Irish Poets. She has illustrated many books, including Best-Loved Oscar Wilde, Best Loved Yeats, The Most Beautiful Letter in the World by Karl O'Neill, a special edition of Ulysses by James Joyce, and A Terrible Beauty by Mairead Ashe Fitzgerald. She lives in a thatched house in Co. Wexford.