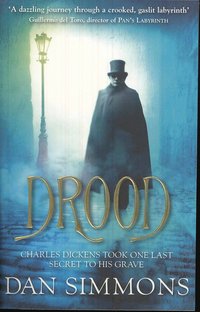 av Dan Simmons, Quercus
Häftad Engelska, 2009-10-01
159
Köp
Spara som favorit
Skickas inom 7-10 vardagar.
Fri frakt inom Sverige över 159 kr för privatpersoner.
This story shall be about my friend (as at least about the man who was once my friend) Charles Dickens and about the accident that took away his peace of mind, his health, and, some might whisper, his sanity...' Sealed for one hundred and twenty-five years, Wilkie Collins's scribbled words launch a feverish descent into the underbelly of Victorian London as he is dragged into Charles Dickens's pursuit of a spectral figure known only as Drood. Their investigation will lead them through slums, opium dens, catacombs and sewers. What they discover will destroy their friendship, driving each writer to the very brink of insanity. And murder...
Visa hela texten

'Readers will race through the pages, drawn by the intricate plot and the proliferation of intriguing psychological puzzles' Publishers Weekly. * Publisher's Weekly * 'A manic energy that compels shock and awe' Independent. * Independent * 'A dazzling journey through a crooked, gaslit labyrinth and a tenebrous portraiture of the tortured minotaurs that dwell within. Genius is the true mystery, and at its edge - the abyss' Guillermo del Toro, film director. * Guillermo del Toro * 'Peopled by characters worthy of Dickens novel .... a fascinating book that adds to the speculative writings about the Victorian author's last and unfinished work. A must-read for all Dickens and Wilkie Collins admirers' Daily Mail. * Daily Mail * 'I am in awe of Dan Simmons' Stephen King. * Stephen King * 'A rich and strange book... the pages fly by' Daily Telegraph. * Daily Telegraph *

Dan Simmons is an outstanding commercial talent. He has won the Hugo award, the World Fantasy Award, the Locus award (three times) and the Bram Stoker award. He lives in Colorado. Dan Simmons was born in Peoria, Illinois, in 1948, and grew up in various cities and small towns in the Midwest. He received his Masters in Education from Washington University in St. Louis in 1971. He worked in elementary education for eighteen years, winning awards for his innovative teaching, and became a full-time writer in 1987. Dan lives in Colorado with his wife, Karen, and has a daughter in her twenties. His books are published in twenty-nine counties and many of them have been optioned for film.