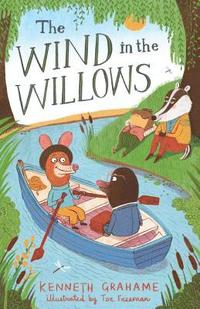 av Kenneth Grahame
Häftad Engelska, 2017-04-21
89
Köp
Spara som favorit
Finns även som
Visa alla 9 format & utgåvor
Depicting the adventures of Rat, Mole, Badger and the pretentious Mr Toad, The Wind in the Willows sees these four animals getting into all sorts of trouble as they wander along the river, through the Wild Wood and around the grand Toad Hall. Adapted for the stage by A.A. Milne as Toad of Toad Hall, and recreated for film and TV numerous times, Kenneth Grahame's tale has been an essential part of every English child's formative reading for over a century, with new generations of readers succumbing to its charm, wit and wonder.
Visa hela texten

A book that we all greatly loved and admired and read aloud or alone, over and over and over. -- Christopher Robin Milne

A British writer most famous for The Wind in the Willows, Kenneth Grahame (1859-1932) worked at the Bank of England before retiring due to ill health. Grahame also wrote The Reluctant Dragon - which, like The Wind in the Willows, was adapted as a Disney film. Tor Freeman was born in London, and graduated from Kingston University with a BA in Illustration in 1999. She has been working as a freelance illustrator since that time. In 2012 she was awarded a Sendak Fellowship, and together with two other illustrators spent a month in Connecticut.