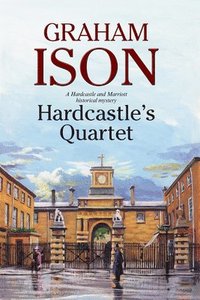 Hardcastle's Quartet: A Police Procedural Set at the End of World War One

av Graham Ison
Häftad Engelska, 2015-02-06
199
Köp
Spara som favorit
Skickas inom 5-8 vardagar.
Fri frakt inom Sverige för privatpersoner.
Accident ...or murder? Detective Inspector Hardcastle's seemingly simple investigation turns more complicated, in his latest case June 1918. A patrolling constable discovers the body of Georgina Cheney, wife of a naval commander, in the basement area of a house in Westminster. At first it is thought to be suicide or even a tragic accident. But as Divisional Detective Inspector Ernest Hardcastle of the A or Whitehall Division of the Metropolitan Police begins to investigate - ably assisted by Detective Sergeant Charles Marriott - they soon discover a different story. It is clear that the woman was murdered, and revelations about the victim's previous life in Malta arouse Hardcastle's interest. But things are destined to get even more complicated for Hardcastle, when he is assigned two further murder cases by Detective Chief Inspector Frederick Wensley, head of the CID at New Scotland Yard. Could they be connected? This may be a puzzle too tricky even for Hardcastle to solve ...
Visa hela texten

"Cleverly plotted mystery, awash with appealing historical details. Another surefire winner for fans of the irascible Hardcastle and the long-suffering Marriott." Booklist The crisp writing and witty dialogue are a plus." Publishers Weekly

Graham Ison was in the regular army before joining the Metropolitan Police. During his career in Scotland Yard's Special Branch, he was involved in several famous espionage cases and spent four years at 10 Downing Street as protection officer to the prime minister. He later guarded crowned heads and US presidents during their visits to Britain, and served as second-in-command of the Diplomatic Protection Group. He is an honorary agent of the US Army Criminal Investigation Command.