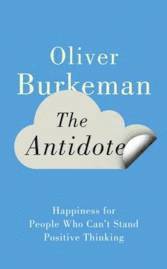 The Antidote is a series of journeys among people who share a single, surprising way of thinking about life. On the surface, they might not seem to share much else: they are philosophers and experimental psychologists, Buddhists and terrorism experts, New Age dreamers and hard-headed business consultants. But what they have in common is a hunch about human psychology: that in our personal lives and the world at large, it's our constant efforts to eliminate the negative - that cause us to feel so anxious, insecure and unhappy. And that there is an alternative "negative path" to happiness and success that involves embracing the things we spend our lives trying to avoid. Oliver Burkeman's new book is a witty, fascinating and counter-intuitive read that turns decades of self-help advice on its head and forces us to rethink completely our attitudes towards failure, uncertainty and death.
Visa hela texten

'The Antidote is a gem. Countering a self-help tradition in which "positive thinking" too often takes the place of actual thinking, Oliver Burkeman returns our attention to several of philosophy's deeper traditions and does so with a light hand and a wry sense of humor. You'll come away from this book enriched - and, yes, even a little happier' - Daniel H. Pink, author of Drive and A Whole New Mind

Oliver Burkeman is a feature writer for the Guardian. He is a winner of the Foreign Press Association's Young Journalist of the Year award, and has been shortlisted for the Orwell Prize and the What The Papers Say Feature Writer of the Year award. He writes a popular weekly column on psychology, This Column Will Change Your Life, and has reported from London, Washington and New York. His work has also appeared in Esquire, Elle, GQ, the Observer and the New Republic. He was born in Liverpool in 1975, grew up in York, and holds a degree in Social and Political Sciences from Cambridge University.