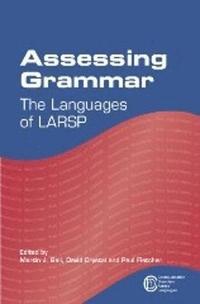 av Martin J Ball, David Crystal, Paul Fletcher
Inbunden Engelska, 2012-03-08
1189
Köp
Spara som favorit
Specialorder (osäker tillgång). Skickas inom 11-20 vardagar.
Gratis frakt inom Sverige över 159 kr för privatpersoner.
Finns även som
Visa alla 2 format & utgåvor
This collection is a resource book for those working with language disordered clients in a range of languages. It collects together versions of the well-known Language Assessment Remediation Screening Procedure (LARSP) prepared for different languages. Starting with the original version for English, the book then presents versions in more than a dozen other languages. Some of these are likely to be encountered as home languages of clients by speech-language therapists and pathologists working in the UK, Ireland, the US and Australia and New Zealand. Others are included because they are major languages found where speech-language pathology services are provided, but where no grammatical profile already exists.
Visa hela texten

This new book brings together an amazing variety of approaches to LARSP including an elegant description of the origin and evolution of LARSP, an update on research on English language applications of LARSP, an evaluation of a computerized version, and reports on adaptations of LARSP to 13 different languages. The publication of LARSP applications across multiple languages expands opportunities for clinical applications as well as clinical research associated with LARSP. The book will serve as a resource for researchers (or students) seeking to identify gaps in research suitable for future attention. -- Nina Simmons-Mackie, Southeastern Louisiana University, USA This volume is so welcome - the frustration of this major tool being out of print for some years may now be over. Hooray! -- Linda Hand, University of Auckland, New Zealand This volume achieves its goals of being both a source book for clinicians working in various languages and introducing new adaptations of LARSP. -- Leah R. Paltiel-Gedalyovich, Hedim Institutes of Audiology, Ltd * LINGUIST List, Vol-24-2071. Wed May 15 2013 *

Martin J. Ball is Professor of Speech Language Pathology at Linkoeping University, Sweden. He is co-editor of the journal Clinical Linguistics and Phonetics (Taylor & Francis), and the book series Communication Disorders Across Languages (Multilingual Matters). His main research interests include sociolinguistics, clinical phonetics and phonology, and the Celtic languages. David Crystal is Honorary Professor of Linguistics at the University of Bangor, UK. Since 1984, he has worked from his home in Holyhead, North Wales as a writer, editor, lecturer and broadcaster on linguistics, applied linguistics, and English language studies. His books include The Cambridge Encyclopedia of Language (2010), The Stories of English (2005) and Internet Linguistics (2011). Paul Fletcher is Emeritus Professor of Speech and Hearing Sciences at University College Cork, Ireland. Since the 1970s he has published widely on language development and language impairment in children speaking English, and more recently on those speaking Cantonese and Mandarin. His research focus, initially primarily on syntax, has broadened to include vocabulary, and the interaction between vocabulary and syntax in language development.