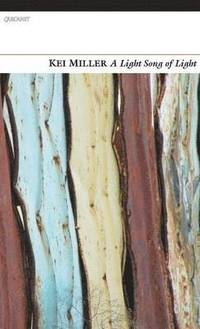 av Kei Miller
Häftad Engelska, 2010-07-28
119
Köp
Spara som favorit
Skickas inom 7-10 vardagar.
Fri frakt inom Sverige över 159 kr för privatpersoner.
Finns även som
Visa alla 1 format & utgåvor
Kei Miller's work was acclaimed by the distinguished Jamaican writer Olive Senior as 'Some of the most exciting poetry I've read in years...An extraordinary new voice singing with clarity and grace'. "A Light Song of Light" sings in the rhythms of ritual and folktale, praise songs and anecdotes, blending lyricism with a cool wit, finding the languages in which poetry can sing in dark times. The book is in two parts: Day Time and Night Time, each exploring the inseparable elements that together make a whole. Behind the daylight world of community lies another, disordered, landscape: stories of ghosts and bandits, a darkness violent and seductive. At the heart of the collection is the Singerman, a member of Jamaica's road gangs in the 1930s, whose job was to sing while the rest of the gang broke stones. He is a presence both mundane and shamanic. Kei Miller's poems celebrate 'our incredible and abundant lives', facing the darkness and making from it a song of the light.
Visa hela texten

Kei Miller was born in Jamaica in 1978. He read English at the University of the West Indies and completed an MA in Creative Writing at Manchester Metropolitan University. His work has appeared in The Caribbean Writer, Snow Monkey, Caribbean Beat and Obsydian III. His first collection of short fiction, The Fear of Stones, was short-listed in 2007 for the Commonwealth Writers First Book Prize. His first poetry collection, Kingdom of Empty Bellies, was published in March 2006 by Heaventree Press; his second, There Is an Anger That Moves, was published by Carcanet in October 2007. He is also the editor of Carcanet's New Caribbean Poetry: An Anthology. He has been a visiting writer at York University in Canada, the Department of Library Services in the British Virgin Islands and a Vera Ruben Fellow at Yaddo, and currently teaches Creative Writing at the University of Glasgow.