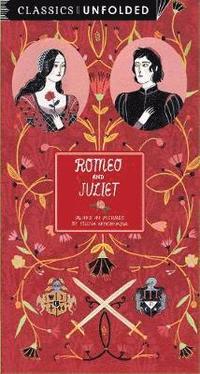 The second in a series of fold-out concertina gift titles that tell world-famous stories in 16 panels, illustrated by American artist Yelena Bryksenkova. Every title in this series is like a visual 'spark notes': a learning tool that simplifies plots into bite-sized pieces, and doubles as a beautiful piece of freestanding art to shelve or frame. Romeo and Juliet visualises William Shakespeare's tale of two star-crossed lovers from different clans, whose love has tragic consequences.
Visa hela texten

WILLIAM SHAKESPEARE (1564-1616) is considered by many to be the greatest playwright of all time. His plays were performed in front of the monarchs of the time (Queen Elizabeth I and King James I) and at theatres in London including the Globe, which has been restored on a new site for modern audiences. A prolific writer, he wrote comedies such as Midsummer Night's Dream and Twelfth Night, histories such as Henry VI and Titus Andronicus and tragedies including Romeo and Juliet, Othello, Macbeth, King Lear and Hamlet. YELENA BRYKSENKOVAis a young artist and illustrator who was born in St Petersburg, Russia. She studied at the Maryland Institute College of Art in Baltimore and the Academy of Applied and Decorative Arts in Prague, Czech Republic. Since graduating she has illustrated for a number of diverse clients including Urban Outfitters, Random House, Penguin Books, and The New York Times. Yelena lives in New England, USA.