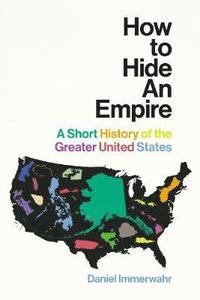 How to Hide an Empire

A Short History of the Greater United States

av Daniel Immerwahr
Inbunden Engelska, 2019-02-28
269
Köp
Spara som favorit
Skickas inom 3-6 vardagar.
Fri frakt inom Sverige för privatpersoner.
Finns även som
Visa alla 2 format & utgåvor
'Wry, readable and often astonishing ... nimbly combines breadth and sweep with fine-grained attention to detail. The result is a provocative and absorbing history of the United States' NEW YORK TIMES For a country that has always denied having dreams of empire, the United States owns a lot of overseas territory. America has always prided itself on being a champion of sovereignty and independence. We know it has spread its money, language and culture across the world - but we still think of it as a contained territory, framed by Canada above, Mexico below, and oceans either side. Nothing could be further from the truth. How to Hide an Empire tells the story of the United States outside the United States - from nineteenth-century conquests like Alaska, Hawai'i, the Philippines and Puerto Rico, to the catalogue of islands, archipelagos and military bases dotted around the globe over which the Stars and Stripes flies. Many are thousands of miles from the mainland; all are central to its history. But the populations of these territories, despite being subject to America's government, cannot vote for it; they have often fought America's wars, but they do not enjoy the rights of full citizens. These forgotten episodes cast American history, and its present, in a revealing new light. The birth control pill, chemotherapy, plastic, Godzilla, the Beatles, the name America itself - you can't understand the histories of any of thesewithout understanding territorial empire. Full of surprises, and driven by an original conception of what empire and globalisation mean today, How to Hide an Empire is a major and compulsively readable work of history.
Visa hela texten

This book changes our understanding of the fundamental character of the United States as a presence in world history. By focusing on the processes by which Americans acquired, controlled, and were affected by territory, Daniel Immerwahr shows that the United States was not just another "empire," but was a highly distinctive one the dimensions of which have been largely ignored. -- David A. Hollinger, Professor Emeritus of History at the University of California, Berkeley, and author of Protestants Abroad There are many histories of American expansionism. How to Hide an Empire renders them all obsolete. It is brilliantly conceived, utterly original, and immensely entertaining - simultaneously vivid, sardonic and deadly serious. -- Andrew J. Bacevich, author of Twilight of the American Century To call this standout book a corrective would make it sound earnest and dutiful, when in fact it is wry, readable and often astonishing ... It's a testament to Immerwahr's considerable storytelling skills that I found myself riveted by his sections on Hoover's quest for standardized screw threads, wondering what might happen next. But beyond its collection of anecdotes and arcana, this humane book offers something bigger and more profound. How to Hide an Empire nimbly combines breadth and sweep with fine-grained attention to detail. The result is a provocative and absorbing history of the United States - 'not as it appears in its fantasies, but as it actually is.' * New York Times * Lively and fascinating ... [Immerwahr] is incapable of writing a dull page, and he has a real gift for making striking and unusual connections -- Noel Malcolm * Sunday Telegraph * [A] smashing new book... fascinating -- Tim Stanley * Daily Telegraph *

Bloggat om How to Hide an Empire

Daniel Immerwahr is an associate professor of history at Northwestern University and the author of Thinking Small: The United States and the Lure of Community Development, which won the Organization of American Historians' Merle Curti Award. He has written for n+1, Slate, Dissent, and other publications.