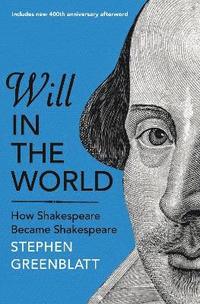 Will In The World

av Stephen Greenblatt
Häftad Engelska, 2016-10-06
219
Köp
Spara som favorit
Finns även som
Visa alla 2 format & utgåvor
Stephen Greenblatt's Will in the World is widely recognised to be the fullest and most brilliant account ever written of Shakespeare's life, his work and his age. Shakespeare was a man of his time, constantly engaging with his audience's deepest desires and fears, and by reconnecting with this historic reality we are able to experience the true character of the playwright himself. Greenblatt traces Shakespeare's unfolding imaginative generosity - his ability to inhabit others, to confer upon them his own strength of spirit, to make them truly live as independent beings as no other artist has ever done. Digging deep into the vital links between the playwright and his world, Will in the World provides the fullest account ever written of the living, breathing man behind the masterpieces.
Visa hela texten

A vast shelf of biographies of the Bard exists, but this is the book I would take with me to a desert island -- Jay Parini * Guardian * A work of wonderful erudition that can be read as an accessible introduction to the social and political milieu from which Shakespeare emerged, and as an elegant guide to the astonishing poems and plays themselves * New Statesman * Both insightful literary criticism and a gripping piece of psychological detective work ... Stephen Greenblatt has few equals as a Shakespeare scholar * Metro * A delight, full of new insights and infused with a rich understanding of precisely why Shakespeare's writing gives us such lasting pleasure ... quite superb -- John Simpson * Sunday Times 'Books of the Year' * Thought-provoking ... full of unexpected touches ... beautifully written -- Andrew Marr * Daily Telegraph * Riveting * Independent * Really gives a sense of being in touch with the man. Greenblatt's knowledge of the plays and the times in which they were written is so encyclopaedic that he can assemble a convincing portrait of Shakespeare without resorting to smoke and mirrors * Sunday Times * The most complexly intelligent and sophisticated, and yet the most keenly enthusiastic, study of the life and work taken together that I have ever read -- Adam Gopnik * New Yorker * One of the finest recent Shakespeare biographies -- Robert McCrum * Guardian * Greenblatt's fantastically readable biography of our greatest writer paints a riveting portrait of Elizabethan England * Daily Telegraph * Compulsively readable and deeply imaginative -- Stanley Wells At last, the book Shakespeare has deserved: a brilliant book written by a virtual eyewitness who understands how a playwright takes the stuff of his life and his world and makes it into theatre -- Charles Mee A tour de force ... a book for artists and ordinary people as well as scholars and students -- Tina Packer A wonderful piece of work -- Simon Russell Beale

Stephen Greenblatt is Cogan University Professor of the Humanities at Harvard University. He is the author of twelve books, including The Swerve: How the World Became Modern, which won the National Book Award and a Pulitzer Prize, as well as the New York Times bestseller Will in the World: How Shakespeare Became Shakespeare and the classic university text Renaissance Self-Fashioning. He is General Editor of The Norton Anthology of English Literature and of The Norton Shakespeare, and has edited seven collections of literary criticism.