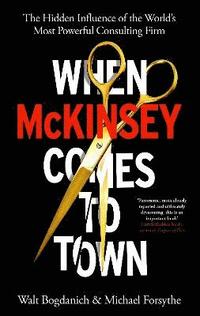 When McKinsey Comes to Town

The Hidden Influence of the World's Most Powerful Consulting Firm

av Walt Bogdanich, Michael Forsythe
Inbunden Engelska, 2022-10-06
210
Köp
Spara som favorit
Finns även som
Visa alla 4 format & utgåvor
**A NEW YORK TIMES AND THE TIMES BOOK OF THE YEAR 2022** An explosive expose of the world's most prestigious and successful management consultancy. 'Panoramic, meticulously reported and ultimately devastating' Patrick Radden Keefe, author of Empire of Pain McKinsey earns billions advising almost every major corporation as well as countless governments, including Britain's, the USA's and China's. It boasts of its ability to maximise efficiency while making the world a better place. Its millionaire partners and network of alumni go on to top jobs in the world's most powerful organisations. And yet, shielded by non-disclosure agreements, its work remains largely secret - until now. In this propulsive investigation, two prize-winning journalists reveal the reality. McKinsey's work includes ruthless cost-cutting in the NHS, incentivising the prescription of opioids and executing Trump's immigration policies (the ones that put children in cages). Meanwhile its vast profits derive from a client roster that has included the coal and tobacco industries, as well as some of the world's most unsavoury despots. McKinsey proudly insists it is a values-led organisation. When McKinsey Comes to Town is a parable of values betrayed: a devastating portrait of a firm whose work has often made the world more unequal, more corrupt and more dangerous. *A The Times Best Book of 2022* 'A story of secrecy, delusion and untold harm' Observer 'Astonishing ... makes you so angry you want to chuck rocks at its offices' Sunday Times 'Every page made my blood boil' Joseph E. Stiglitz, Nobel laureate
Visa hela texten

A masterful work of investigative journalism ... to unearth conflicts of interest, corruption, hypocrisy and strategic blunders that read like a prosecutor's indictment ... The fact that neither regulators, the public, nor most of McKinsey's employees knew about these sordid episodes ... is a testament to the authors' prowess as investigative reporters ... superb * Washington Post * 'A lengthy and damning charge sheet ... makes you so angry you want to chuck rocks at its offices ... the evidence the authors winkle out is astonishing ... What sustains you are the authors' eye for detail and killer quotes. If you want to know why top pay for US executives has risen to a record 350 times that of the average worker, look to McKinsey * Sunday Times * Deeply reported ... The portrait this book creates is one of a company chasing profits, spreading the gospel of downsizing and offshoring, its leaders virtually unmoored from any guiding principles or moral code ... a clear and devastating picture of the management philosophy that helped drive the decline of a stable ... middle class over the last 50 years' * The New York Times * A harrowing account of decades of dishonourable exploits * Economist * Hard-hitting ... damning ... If you think what management consultants do is to dress up common sense in jargon and flog it as vision to credulous executives, you are, according to [Bogdanich and Forsythe], greatly underestimating their impact * The Times * New York Times reporters Walt Bogdanich and Michael Forsythe's devastating investigation into the consulting firm uncovers a story of secrecy, delusion and untold harm. ... The book's scrutiny - and measured sense of outrage - is overdue and, you hope, only the beginning * Observer * With McKinsey's deep reach into business and government around the world, it is inevitably and correctly a focus for discussion on what modern corporations are for ... That this internal turmoil has come to light is testament to the depth of sourcing of journalists Walt Bogdanich and Michael Forsythe [whose] reporting of these and other controversies has intensified questions over the firm's ethics ... The debate ... is intensely uncomfortable for McKinsey's leadership' * Financial Times * In government and the private sector, the influence of McKinsey is difficult to overstate. Walt Bogdanich and Michael Forsythe penetrate the firm's vaunted culture of secrecy to expose the malign ways in which McKinsey's 'scientific management' ends up impacting all of our lives. Panoramic, meticulously reported and ultimately devastating, this is an important book -- Patrick Radden Keefe, author of Empire of Pain Hypocrisy, avarice, ridiculous PowerPoints, aiding and abetting the world's polluters and drug companies. Every page made my blood boil as I read about McKinsey's flawed reasoning and the vast profits made from ethically dubious work for governments, polluting companies and big pharma -- Joseph E. Stiglitz, Nobel Laureate, author of The Price of Inequality Two of the finest investigative reporters in the business got behind the wall of secrecy erected by one the world's most influential companies. A revelatory - and disturbing - portrait of a powerful firm whose vaunted reputation is belied by its actions -- Jane Mayer, author of The Dark Side After the publication of When McKinsey Comes to Town, the secretive consulting firm is going to need its own management consultant to address the damage. A tour de force of investigative reporting -- James B. Stewart, author of Den of Thieves A highly informed, fascinating read * The Guardian * Can you trust those clever folk at the consulting firm McKinsey? ... This book shows that McKinsey & Company has a darker side. * The Times, *Best Business Books of 2022* * Timely * The Week * Excellent investigative work ... Every chapter of When McKinsey Comes to Town lays out another disturbing case in which McKinsey worked against the public interest * Literary Review *