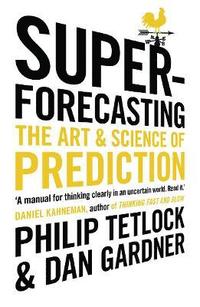 The Art and Science of Prediction

av Philip Tetlock, Dan Gardner
(2 röster)
Häftad Engelska, 2016-04-07
105
Köp
Spara som favorit
Skickas inom 5-8 vardagar.
Gratis frakt inom Sverige över 159 kr för privatpersoner.
Finns även som
Visa alla 3 format & utgåvor
The international bestseller 'A manual for thinking clearly in an uncertain world. Read it.' Daniel Kahneman, author of Thinking, Fast and Slow _________________________ What if we could improve our ability to predict the future? Everything we do involves forecasts about how the future will unfold. Whether buying a new house or changing job, designing a new product or getting married, our decisions are governed by implicit predictions of how things are likely to turn out. The problem is, we're not very good at it. In a landmark, twenty-year study, Wharton professor Philip Tetlock showed that the average expert was only slightly better at predicting the future than a layperson using random guesswork. Tetlock's latest project - an unprecedented, government-funded forecasting tournament involving over a million individual predictions - has since shown that there are, however, some people with real, demonstrable foresight. These are ordinary people, from former ballroom dancers to retired computer programmers, who have an extraordinary ability to predict the future with a degree of accuracy 60% greater than average. They are superforecasters. In Superforecasting, Tetlock and his co-author Dan Gardner offer a fascinating insight into what we can learn from this elite group. They show the methods used by these superforecasters which enable them to outperform even professional intelligence analysts with access to classified data. And they offer practical advice on how we can all use these methods for our own benefit - whether in business, in international affairs, or in everyday life. _________________________ 'The techniques and habits of mind set out in this book are a gift to anyone who has to think about what the future might bring. In other words, to everyone.' Economist 'A terrific piece of work that deserves to be widely read . . . Highly recommended.' Independent 'The best thing I have read on predictions . . . Superforecasting is an indispensable guide to this indispensable activity.' The Times
Visa hela texten

We should indeed apply superforecasting more systematically to government. Like systematic opinion polling, it is an aid to decision-makers and informed debate. It is ideologically neutral, unless you have a bias in favour of ignorance. This is all good. -- Andrew Adonis * Independent * Read Philip Tetlock's Superforecasting, instead of political pundits who don't what they're talking about. -- Dominic Cummings Superforecasting is a very good book. In fact it is essential reading - which I have never said in any of my previous Management Today reviews . . . It should be on every manager's and investor's reading list around the topics du jour of decision-making, prediction and behavioural economics. -- Andrew Wileman * Management Today * Tetlock and his colleagues [have] found that there is such a thing as foresight, and it's not a gift that's bestowed upon special people, but is a skill that can be learned and developed . . . To obtain this apparent superpower does not take a PhD or an exceptionally high IQ; it takes a certain mindset. * Guardian * Just as modern medicine began when a farsighted few began to collect data and keep track of outcomes, to trust objective 'scoring' over their own intuitions, it's time now for similar demands to be made of the experts who lead public opinion. It's time for evidence-based forecasting. * Washington Post * A top choice [for best book of 2015] among the world's biggest names in finance and economics . . . Eurasia Group founder Ian Bremmer, Deutsche Bank Chief U.S. Economist Joe LaVorgna, and Citigroup Vice Chairman Peter Orszag were among those giving it a thumbs-up. * Bloomberg Businessweek * Captivating . . . [Tetlock's] writing is so engaging and his argument so tantalizing, readers will quickly be drawn into the challenge . . . A must-read field guide for the intellectually curious. * Kirkus Reviews * A scientific analysis of the ancient art of divination which shows that forecasting is a talent. -- Books of the Year * Economist * Both rigorous and readable. The lessons are directly relevant to business, finance, government, and politics. -- Books of the Year * Bloomberg Business * Offers a valuable insight into the future of management. -- CMI Management Book of the Year judges A fascinating book. * PR Week * Social science has enormous potential, especially when it combines 'rigorous empiricism with a resistance to absolute answers.' The work of Philip Tetlock possesses these qualities. * Scientific American * What I found most interesting was the continuous process of integrating new information to test and modify existing beliefs ... clearly a beneficial skill in financial markets * Citywire * Tetlock and Gardner believe anyone can improve their forecasting ability by learning from the way they work. If that's true, people in business and finance who make an effort to do so have a lot to gain - and those who don't, much to lose. * Financial Post * Philip Tetlock's Superforecasting is a common-sense guide to thinking about decision-making and the future by a man who knows this terrain like no one else. -- Books of the Year * Bloomberg Business * Tetlock writes boldly about wanting to improve what he sees as the bloated, expensive - and not terribly accurate - intelligence apparatus that advises our politicians and drives global affairs. * City A.M. * The lessons of superforecasting are keenly relevant to huge swathes of our lives. -- Matthew Syed * The Times * Superforecasting by Philip Tetlock and Dan Gardner, is one of the most interesting business and finance books published in 2015. -- John Kay * Financial Times * Tetlock's work is fascinating and important, and he and Gardner have written it up with verve. - Financial Times -- Stephen Cave A fascinating study of what it is that makes some forecasters consistently better than others. * International Politico * Superforecasting is the most important scientific study I've ever read on prediction. * Bloomberg View * There isn't

Philip Tetlock is Leonore Annenberg University Professor of Psychology at the University of Pennsylvania. He is the author of several books on politics and psychology, including Counterfactual Thought Experiments in World Politics and the award-winning Expert Political Judgment: How Good Is It? How Can We Know? Dan Gardner is a journalist, author and lecturer. He is the best-selling author of Future Babble: Why Expert Predictions Fail and Why We Believe them Anyway and Risk: The Science and Politics of Fear, which was published in 11 countries and 7 languages. He lives in Ottawa, Canada.