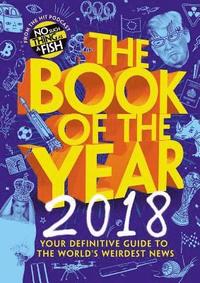 Your Definitive Guide to the World's Weirdest News

av No Such Thing As A Fish
Inbunden Engelska, 2018-10-18
169
Köp
Spara som favorit
Skickas inom 3-6 vardagar.
Fri frakt inom Sverige för privatpersoner.
Finns även som
Visa alla 1 format & utgåvor
__________ 'My favourite geeks. Hilarious. Sideways. Brilliant.' Tim Minchin In a year dominated by Russian collusion and Brexit confusion, The Book of the Year returns with another dose of barely believable yet wholly unimpeachable facts and stories from the past twelve months. Every week for the past four years, Dan, James, Anna and Andy - the creators of the award-winning, chart-topping comedy podcast No Such Thing As A Fish - have wowed each other and millions of their listeners with the most astonishing trivia they have learned over the previous seven days. Now, once again, they have put down the microphones, picked up their pencils, and transformed a year's worth of weird and wonderful happenings into one uplifting book that you won't be able to put down. Discover how Peruvian mummies affected the World Cup, and why Love Island contestants are experts in game theory - as well as hundreds of stories that may have passed you by entirely, including the news that: * NASA sent a man with a fear of heights to the International Space Station. * An ice hotel in Canada caught fire. * Mark Zuckerberg's private data was compromised while he was talking to Congress about compromised data. From Kim Jong Un's personal potty to Jeremy Corbyn's valuable vegetables, The Book of the Year 2018 is an eye-opening tour of yet another incredible year you didn't know you'd lived through.
Visa hela texten

De som köpt den här boken har ofta också köpt The Book of the Year 2019 av No Such Thing As A Fish (inbunden).

Fler böcker av No Such Thing As A Fish

The weirdest facts behind the headlines of the previous 12 months. -- Books of the Year * Mail on Sunday * Bitesize chunks of truth in a year of fake news. If you love fact-based trivia, you'll get a kick out of this. -- Funniest Books for Christmas * Irish Times * The Book of The Year will prove the perfect Christmas gift, the ideal conversation starter (and stopper), and the ultimate source of wisdom for all lovers of trivia. * British Comedy Guide * Both fantastically absorbing and entertaining. * The Bookseller * A bumper anthology of ridiculous but true facts from the anoraks (and QI researchers) behind hit podcast No Such Thing As A Fish. * Metro * Absolutely ideal for the Christmas holidays. -- Mark Radcliffe, BBC Radio 6 Music If you love funny facts as much as we love funny facts then you should get your funny fact-loving faces in front of The Book of the Year. -- Comedy Central (via @ComedyCentralUK) QI is such an institution that even the programme's researchers are taking over the world. Fully justified that is too, as anyone who's heard their podcast, No Such Thing As A Fish, will confirm. It's packed with killer facts - and so is this book. * Daily Mail * A factually relevant look at a baffling 12 months. -- Best Books for Christmas * iNews * The Book of the Year [is] a compendium of topical facts in 365 categories. It's laced with their dry wit, and likely to end up in many a pub-quizzer's Christmas stocking. * Daily Telegraph * Hugely enjoyable . . . Deserves to become an annual institution . . . Its tone is just right: deadpan, sharp and disarmingly offbeat. -- 5 * review, Craig Brown * Mail on Sunday * The sheer scope of the research takes the breath away, and the humour is perfectly judged. -- The Season's Best Gift Books * Spectator *

No Such Thing as a Fish is a team of researchers who work on the BBC TV show QI. Each week they gather together in their Covent Garden office and record a podcast discussing the most interesting facts they've discovered over the previous seven days. In the five years since it launched, the show has been downloaded more than 200 million times, won multiple awards, been transformed into the spin-off topical BBC Two TV series No Such Thing as the News, performed national and international tours (including selling out the Hammersmith Apollo and the Sydney Opera House along the way), and was named one of iTunes' top 10 most downloaded podcasts of 2016, 2017 and 2018. The team is made up of James Harkin, Andrew Hunter Murray, Anna Ptaszynski and Dan Schreiber. James is a script editor on QI, with a dozen series and seven bestselling books under his belt. He has also appeared on TV quiz shows Fifteen to One and Only Connect, reaching the semi-finals in the latter and embarrassingly crashing out of the former. Andrew is a writer and comedian who also contributes to Private Eye magazine. His first novel, The Last Day, will be published in spring 2020. His nickname among No Such Thing as a Fish fans is 'Lightning' (or so he claims). Anna is a script editor on QI who has previously worked in Scottish politics and Australian advertising, as well as selling fruit wine and hay-baling in the Highlands. She refuses to join Twitter. #GetAnnaOnTwitter Dan is a comedian and producer who co-created the award-winning BBC Radio 4 series The Museum of Curiosity; has fronted numerous TV shows, including his own Channel 4 documentary; and, as a stand-up, saw his debut show named at the time as one of the top 100 most favourably reviewed shows of the Edinburgh Fringe. He ranked 100th.