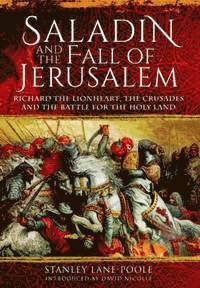 Saladin and the Fall of Jerusalem

Richard the Lionheart, the Crusades and the Battle for the Holy Land

av Stanley Lane-Poole
Inbunden Engelska, 2016-08-30
249
Köp
Spara som favorit
Skickas inom 5-8 vardagar.
Fri frakt inom Sverige för privatpersoner.
Saladin is a legendary figure in the history of the Middle East. His rise to prominence in the tumultuous arena of twelfth-century Middle Eastern politics was rapid and he quickly established himself as an intrepid statesman as well as a formidable military commander of great skill, but equally a man of honour. This detailed biography of Saladin, and history of his life and times, was written by the eminent historian Stanley Lane-Poole, who was able to access the rich and colourful chronicles of Arab historians, which provide us with a brilliant insight into the life and deeds of this warrior-monarch. Based on a lifetime of study, Saladin and the Fall of Jersusalem examines Saladin's youth, his military development, his conquest of Egypt and Syria, the Holy War against the crusaders and, crucially, his duel with Richard the Lionheart, including the struggle over Acre and, of course, the fall of Jerusalem. 'Stanley Lane-Poole has rendered valuable service in his different works by presenting various phases of Oriental history and life in such a way as to interest even those to whom such subjects are ordinarily a sealed book'. The American Historical Review
Visa hela texten

Bloggat om Saladin and the Fall of Jerusalem

David Nicolle is a leading expert on the history of medieval warfare, in particular the Crusades and Middle Eastern warfare, and he is a prolific writer of books on these subjects as well as articles and magazine articles. Among his many previous works are The Hundred Years War; The Mongol Warlords;Saladin and the Saracens; The Crusades; The Medieval Warfare Sourcebook; Hattin 1187 and Fighting for the Faith. Stanley Lane-Poole was an eminent historian who specialised in studies of the Middle East. His works included The Moors in Spain, The Art of the Saracens and Cairo.