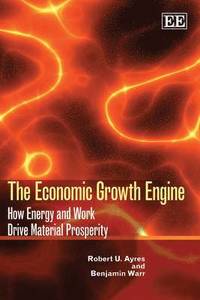 av Robert U Ayres, Benjamin Warr
Inbunden Engelska, 2009-02-27
2269
Köp
Spara som favorit
Skickas inom 5-8 vardagar.
Fri frakt inom Sverige för privatpersoner.
Finns även som
Visa alla 1 format & utgåvor
The historic link between output (GDP) growth and employment has weakened. Since there is no quantitively verifiable economic theory to explain past growth, this unique book explores the fundamental relationship between thermodynamics (physical work) and economics. The authors take a realistic approach to explaining the relationship between technological progress, thermodynamic efficiency and economic growth. Their findings are a step toward the integration of neo-classical and evolutionary perspectives on endogenous economic growth, concluding in a fundamental explanation of endogenous growth that is both quantifiable and consistent with the laws of thermodynamics. For two centuries fossil and other sources of energy (work) have been replacing human and animal muscles. Now our civilization is truly addicted to fossil energy availability at ever low prices. Can increasing efficiency compensate for coming scarcity? This is the crucial question. The most important implication of this is that future economic growth is not guaranteed because the efficiency gains that have driven growth in the past may not continue in the future. Exploring the theory of growth with an emphasis on the role of energy, useful work and technological change, this book will be of great interest to academics and students focussing on growth theory, energy and ecological economics. It will also prove insightful to those concerned with policy making or responding to changes in policy related to the energy-growth nexus.
Visa hela texten

'It gives me great pleasure to review this important book. I recommend it highly to any physicist with an interest or curiosity about this "economy thing" within which we operate. . . There is no excuse not to get this invaluable volume onto your bookshelf.' -- Simon Roberts, Institute of Physics Energy Group 'This book addresses a very important topic, namely economic growth analysis from the angle of energy and material flows. The treatment is well balanced in terms of research and interpretation of the broader literature. The book not only contains a variety of empirical indicators, statistical analyses and insights, but also offers an unusually complete and pluralistic view on theorizing about economic growth and technological change. This results in a number of refreshing perspectives on known ideas and literatures. The text is so attractively written that I found it very difficult to stop reading. All in all, this is a very original and important contribution to the everlasting debate on growth versus environment.' -- Jeroen C.J.M. van den Bergh, University of Barcelona, Spain and Free University, Amsterdam, The Netherlands 'Would you want your great-grandchildren in 2100AD to have a 22nd-century industrial economy? If so, read this book to grasp how strongly wealth depends on energy and its efficient use. Start treating fossil energy not as continuing income, but as one-time energy capital to spend on efficiency and long-term sustainable energy production. Otherwise, your descendants will inherit a broken 20th-century economy that only worked with cheap fossil fuels. They will not be rich and they will wonder what their ancestors were thinking.' -- John R. Mashey, PhD, former Chief Scientist, Silicon Graphics 'Current economic theory attributes most income growth to technical progress. However, since technical progress can neither be defined nor measured, no one really knows what policies will encourage income growth. Ayres and Warr show that access to useful work, which can be defined and measured, explain the bulk of post-1900 income changes in Japan, Britain and the USA. They see rising real prices for fossil fuel and stagnating efficiencies of converting raw energy into useful work as a threat to continued income growth. This brilliant and original work has profound policy implications for future income growth without significant improvements in energy conversion efficiency.' -- Thomas Casten, Chairman, Recycled Energy Development LLC 'Following the up-and-down energy shock of 2008, Ayres and Warr offer a unique analysis critical to our economic future. They argue that "useful work" produced by energy and energy services is far more important to overall GDP growth than conventional economic theory assumes. Their new theory, based on extensive empirical and theoretical analysis, has important implications for economists, businessmen and policymakers - for anybody concerned with our economic future. Ayres and Warr argue persuasively that economic growth is not only endogenous but has been driven for the past two centuries largely by the declining effective cost of energy. If their new theory is correct, the inevitable future rise of the real cost of energy (beyond the $147 oil price peak in July 2008), could halt economic growth in the US and other advanced countries unless we dramatically improve energy with technology.' -- J. Paul Horne, independent international market economist